With Wisconsin's vote-count completed, showing Joe Biden ahead by 20,697 votes, the Trump campaign is requesting a recount, citing "reports of irregularities."

Trump campaign manager Bill Stepien said that despite "ridiculous public polling used as a voter suppression tactic, Wisconsin has been a razor thin race as we always knew that it would be."

"There have been reports of irregularities in several Wisconsin counties which raise serious doubts about the validity of the results, he said in a statement.

The Wisconsin Elections Commission pointed out via Twitter that the 20,000 margin is reported by media outlets and is not an official count. The commission won't start getting official numbers from county clerks until next week, the Washington Examiner reported.

The Trump campaign, however, regards it as one of seven states still in play, with Joe Biden at 227 electoral votes and President Trump at 214.

On Wednesday morning, Biden overtook Trump's lead in Wisconsin (10 electoral votes) and Michigan (16), and he leads in Nevada (6) and Arizona (11).

Media also have called Arizona for Biden, but the Trump campaign said Wednesday in a conference call with reporters that its data predict a Trump victory by 30,000 votes.

Pennsylvania has extended the deadline for mail-in votes to be received from Election Day until three days later, after a ruling from the Pennsylvania Supreme Court.

Stepien didn't specify the "irregularities." But in one of many tweets flagged by Twitter as "misleading about an election or other civic process," Trump said that Democrats "are working hard to make up 500,000 vote advantage in Pennsylvania disappear — ASAP. Likewise, Michigan and others!"

In another tweet, the president referred to a "ballot dump" in Michigan overnight of more than 200,000 ballots that many Twitter users saw as suspicious.

"Last night I was leading, often solidly, in many key States, in almost all instances Democrat run & controlled. Then, one by one, they started to magically disappear as surprise ballot dumps were counted," the president wrote on Twitter. "VERY STRANGE, and the ‘pollsters’ got it completely & historically wrong!"

See the graph, based on an ABC News map with data from Nate Silver's FiveThirtyEight: 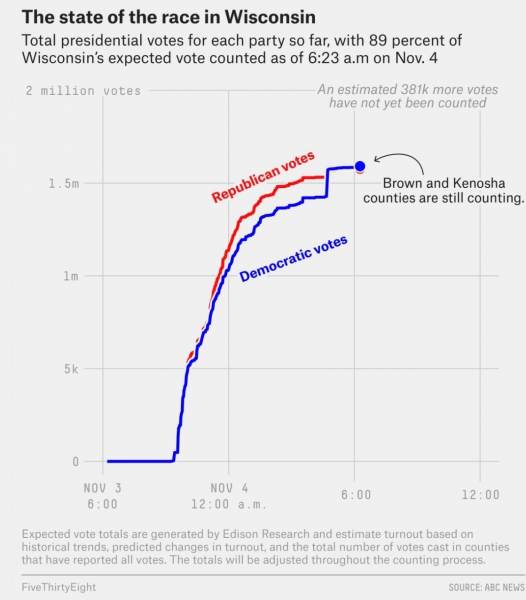 And in Michigan, the Trump campaign flagged a similar "ballot dump" in Michigan and filed a lawsuit in the Michigan Court of Claims "to halt counting until meaningful access has been granted."

"We also demand to review those ballots which were opened and counted while we did not have meaningful access," the campaign said in a statement. 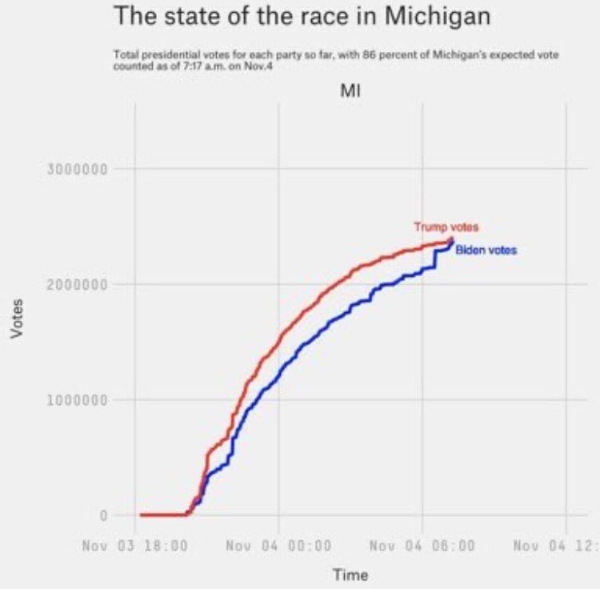 Republicans also have filed a lawsuit in Pennsylvania seeking to throw out votes in a county that contacted some voters to give them an opportunity to "cure" problems with their absentee ballots.

'Fraud on the American public'

At about 2:30 a.m. Wednesday morning, with officials in Pennsylvania, Michigan and Wisconsin determining no winner would be announced on Election Night, Trump told supporters at the White House that Democrats were trying to steal the election.

Nothing unusual about all this?

Conservative political analyst and legal scholar Mark Levin charged the media "are playing with the electoral map and their declarations of who won what states, and in virtually every case it assists the Biden campaign."

"North Carolina, Georgia, Alaska should all be called now for President Trump," he wrote in a Twitter thread. "There was no legitimate reason to call Arizona early for Biden with so much of the vote out. There was no reason to sit on Florida and Ohio for hours when those outcomes were quite clear."

Levin said the purpose is to make it appear that the president is not close to the 270 electoral vote number to win the presidency and will not be reelected.

He pointed to delays throughout the night in counting mail-in votes in Philadelphia, Atlanta, Milwaukee and Detroit.

"This is followed by commentators telling us that there's nothing unusual about all of this," that delays in counting votes happen all the time.

"Really, we've experienced this before? In all these states? Nonsense," he said. "Meanwhile, the Democrats have been litigating in states for months to change existing election laws to help Biden and the Democrats.

"They set in place the mail-in voting chaos, some states literally a few months ago."

In Erie, Pennsylvania, an investigation is underway into a claim that 100 Republican ballots were destroying at a polling site.

BREAKING: Chair of Election Board issues statement about the Erie, PA incident where a resident claimed to be a poll worker and destroyed 100 Republican ballots.

They also confirm there is now an ongoing investigation to pursue potential criminal charges. pic.twitter.com/2FNqymiEbq