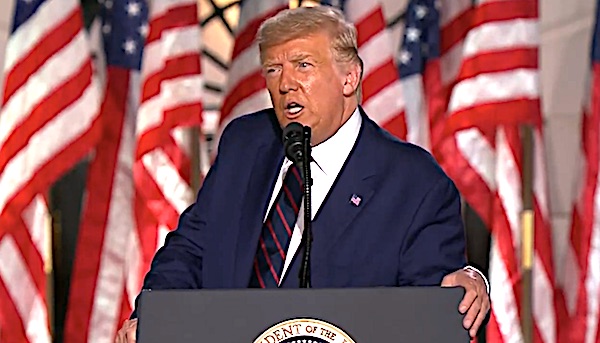 Recalling Julius Caesar's iconic crossing of the Rubicon when the fate of the Roman republic hung in the balance, author Matt Walsh is urging President Trump to use his bully pulpit to put the current contested election in perspective.

Trump should, through perhaps a "Thanksgiving fireside chat," address the nation before his cases arrive at the U.S. Supreme Court, Walsh wrote for the Epoch Times,

Above the the din of the "talking heads and the chattering classes," the president should "explain to the American people what the stakes really are: not your political survival, but the survival of the Republic itself under a constitution the left increasingly and openly despises."

"And then let the evidence be seen and the judgments — both political and historical — rendered. Roll the dice," he wrote.

Walsh is the editor of The-Pipeline.org and the author of "The Devil’s Pleasure Palace," "The Fiery Angel" and "Last Stands," a cultural study of military history from the Greeks to the Korean War.

He argued that all Americans "who care about the Constitution should wish him well, even if they cannot wish him success."

The call to give up and accept the verdict, he said, is "rich coming from those who refused to accept the outcome of 2016, proclaimed themselves the 'resistance,' and have been waging guerilla warfare against Trump and his voters ever since."

Walsh argued that as president, "he swears the most public oath imaginable to preserve, protect, and defend the constitution as he sees it."

"Whether by so doing serves his own immediate interests is beside the point," he said.

"What Trump, like Caesar, understands is that he can't back down from this fight, even should he wish to," Walsh wrote.

"To leave an open question of whether our porous and multifarious systems of voting are easily manipulated and therefore untrustworthy would be to do the nation a great disservice."