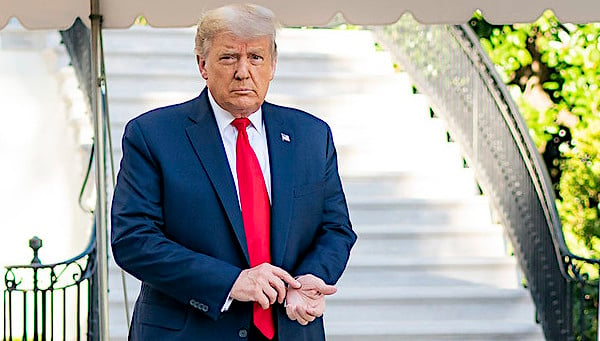 Amid legal challenges in several battleground states alleging vote fraud, President Trump dropped a bomb Thursday with a tweet claiming 2.7 million votes for him across the nation were deleted through Dominion Voting Systems machines.

The tweet cited a report by One American News that attributed the claim to an "unaudited analysis of data obtained from Edison Research."

OAN did not name the author of the analysis, which the television network said found that 221,000 votes had been switched from Trump to Joe Biden. States using the Dominion systems switched 435,000 votes from the Republican to the Democrat, the report said.

Larry Rosin, the president of Edison Research, told WND in an email that he has no knowledge of the "analysis."

"Edison Research has produced no such report and we are not aware of any voter fraud," he said.

A spokesman for Denver-based Dominion said in a statement to the Denver Post that the company "categorically denies any claims about any vote switching or alleged software issues with our voting systems."

"Our systems continue to reliably and accurately count ballots, and state and local election authorities have publicly confirmed the integrity of the process," the spokesman said.

In 2016, however, Andrew Appel, a Princeton professor of computer science and an election security expert, demonstrated on Fox News how a Dominion machine could be hacked to switch votes from one candidate to another.

The Fox Business Network's Lou Dobbs reported the Texas secretary of state in 2019 rejected Dominion because of major flaws in its software.

The company's Democracy Suite 5.5A, which is used in six battleground states and 22 others, is error-prone and non-intuitive, the secretary of state said.

Among the problems were an inability to check and retain straight-party selections, and paper jams that required a seal to be broken to fix.

Dominion Voting Systems: Toronto based @dominionvoting was rejected by Texas Secretary of State in 2019 for major flaws in their software. Why was it used this election in 6 battleground states and 22 others? #MAGA #AmericaFirst #Dobbs pic.twitter.com/5QYBspy8VA

On Wednesday, Trump replied to a tweet asking, "What do we know about Dominion?"

The president said, "It attempted to alter our election and got caught?

Following up the president's tweet, campaign lawyer Lin Wood promised the evidence of fraud will be convincing.

"Soon, no objective, fair-minded person will be able to deny massive fraud perpetrated in planned, coordinated scheme to steal our Presidency," he wrote.

Wood, who successfully  represented Kentucky teen Nicholas Sandmann in a defamation suit against the Washington Post and CNN, explained at a news conference in Atlanta why he joined the president's legal team.

"I was sitting around Tuesday night watching the election returns, I’ve loved politics all my life, since I first voted in 1972. And I saw what I assumed was going to happen. I saw President Trump building up what I believed was going to be almost an historic landslide victory," Wood said.

"Then all the sudden every network, including Fox News, started doing what they do best – they started lying to the American public. And they took a victory from Donald Trump and they called it a lie," he said.

President Trump's personal lawyer Rudy Giuliani said in an interview this week that a Dominion worker in Michigan provided an affidavit state 100,000 ballots were brought to a vote tabulation center to "catch up with Trump."

A worker for Dominion in Michigan provided an affidavit to @RudyGiuliani stating 100k ballots for Biden were brought in to "catch up with Trump."