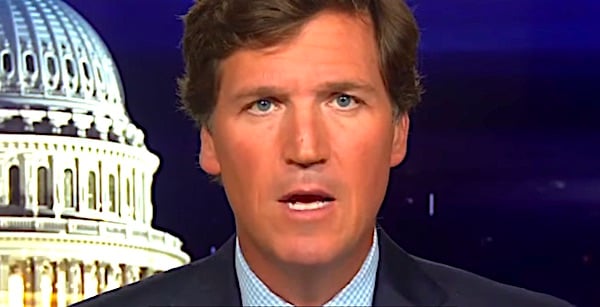 Fox News host Tucker Carlson on Monday night called for allegations of vote fraud in the 2020 presidential election to be fully investigated before a winner is declared.

"You can't simply tell people to accept an outcome, because force doesn't work in a democracy," he said on "Tucker Carlson Tonight."

He noted that in the key battleground states of Pennsylvania, Nevada and Michigan, the Trump campaign has now collected signed affidavits attesting to criminal activity during the voting process. In Detroit, for example, witnesses have alleged under oath that ballots were improperly backdated and counted without matching signatures.

Here is the rest of Tucker's segment where he talks about the evidence that has been presented of voter fraud in this election. pic.twitter.com/oOIM2hp3Tv

"There's only one way to lower the national temperature and unite the country. We need to find out exactly what happened in this election. There are questions. And that means we have to answer them," he said.

Carlson pointed out that one poll watcher alleges that 40,000 late unsealed absentee ballots were counted orally, and all of them went for Democrats. In Nevada, eight election officials say they witnessed voter fraud abetted by other election officials and by their supervisors.

A poll worker declared in an affidavit he saw people bringing ballots to a Biden-Harris campaign van. The ballots were then filled out at the van and placed in return envelopes. Eventually, Biden supporters formed a wall to block outsiders from seeing what they were doing.

"Meanwhile, according to voting records, people who were not even alive still somehow managed to vote. … In New York deceased voters cast absentee ballots. On Oct. 9, in Nevada, a man called Fred Stokes Jr. mailed in his vote. The only problem was Fred Stokes Jr. died three years ago at the age of 92. The Republican party of Nevada says it is aware of hundreds of other potential cases of dead people casting ballots," he said.

In Pennsylvania, Carlson continued, records show turnout from several people who were born in the 19th century.

"They apparently rose from their graves to vote," he said.

"Now all of that is real. We spent all weekend checking it. False claims of fraud can be every bit as destructive as the fraud itself so we need to be careful and responsible. All of us," said Carlson.

There's much more, he added, noting that only hours before the show, a Georgia election official admitted officials will find illegal votes and double voters when they check the voter rolls.

"Nothing this grotesque can go on forever. The only solution is honesty," he wrote. "Let's repeal our National dishonesty mandate and tell the truth about everything. Enforced lying is making everyone paranoid and crazy."

“Nothing this grotesque can go on forever. The only solution is honesty. Let’s repeal our National dishonesty mandate and tell the truth about everything. Enforced lying is making everyone paranoid and crazy. The truth can’t be any worse.”