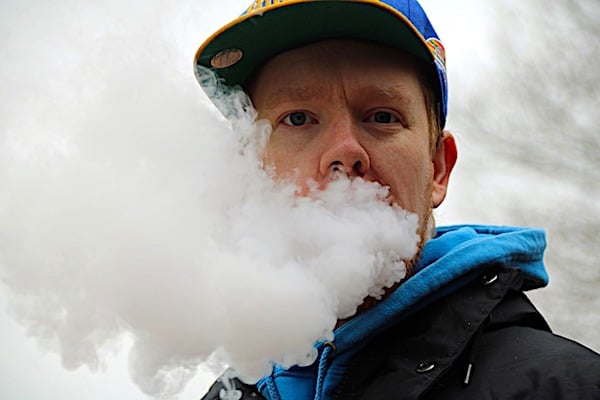 A new literature review conducted by the Cochrane Tobacco Addiction Group in the United Kingdom found that electronic cigarettes (ECs) are a more effective tool for smoking cessation than nicotine gum and nicotine patches (NCTs or nicotine replacement therapy.)

The review included 50 different studies involving 12,430 participants of which 26 were randomized control tests (RCTs.) The findings concluded that:

There was moderate‐certainty evidence, limited by imprecision, that quit rates were higher in people randomized to nicotine EC than in those randomized to nicotine replacement therapy (NRT) (risk ratio (RR) 1.69, 95% confidence interval (CI) 1.25 to 2.27; I2 = 0%; 3 studies, 1498 participants). In absolute terms, this might translate to an additional four successful quitters per 100 (95% CI 2 to 8).

“There is now evidence that electronic cigarettes with nicotine are likely to increase the chances of quitting successfully compared to nicotine gum or patches,” said Jamie Hartmann-Boyce, an expert at the Cochrane Tobacco Addiction Group who co-led the review.

One reason that ECs might be more effective than gum or the patch at quitting is that users are able to continue the act of “smoking” while managing their nicotine addiction. But are e-cigarettes less harmful than combustible tobacco? The literature review did not have an answer but stated, “We did not detect any clear evidence of harm from nicotine EC, but longest follow‐up was two years and the overall number of studies was small.”

According to Dr. Michael Siegel, a Professor in the Department of Community Health Sciences at Boston University School of Public Health, “there is overwhelming evidence that smoking is more hazardous than vaping.” He writes,

One of the most compelling lines of evidence is a series of studies showing that when smokers switch to e-cigarettes, they experience immediate and dramatic improvement in both their respiratory and cardiovascular health, measured both subjectively and objectively. Also compelling is evidence that e-cigarette aerosol contains much lower levels of thousands of chemicals, including scores of carcinogens, compared to tobacco smoke and that e-cigarette users have demonstrably lower levels of toxic chemical biomarkers than smokers. And this isn't even to mention the evidence from thousands of vapers who testify that their health has improved substantially since switching from smoking to vaping.

A study published in the Journal of the American College of Cardiology (JACC) found that improvements in vascular function appeared as early as one month after of switching from combustible tobacco to electronic cigarettes. Dr Konstantinos Farsalinos, a research fellow at the Onassis Cardiac Surgery Center in Athens, Greece, and at the Department of Pharmacy, summarizes,

Similar improvements were observed for those using nicotine-containing and nicotine-free e-cigarettes, debunking a common myth (which has already been disproven through snus research) that nicotine contributes substantially to smoking-related cardiovascular risk. Even more remarkably, improvements in vascular function were observed even in those who did not completely quit smoking but substantially reduced their smoking consumption.

In the U.S., well-funded anti-vaping groups have lobbied for regulations and legislation to ban e-cigarettes and flavored e-cigarettes. Flavored e-cigarettes help smokers stay away from combustible tobacco so bans and restrictions make it harder for smokers to obtain an effective method to quit smoking. Anti-smoking groups like The Truth Initiative, an organization that claims to “inspire tobacco-free lives” brags that “By the end of 2019, 274 localities placed restrictions on flavored tobacco products, and, of those, 88 have comprehensive bans on menthol products, which are sometimes exempted from flavor policies.”

Elected officials are also part of the anti-vaping movement, claiming their regulatory efforts are aimed at stopping teens from using e-cigarettes. Rep. Raja Krishnamoorthi (D-IL), Rep. Peter King (R-NY), and Senator Dick Durbin (D-IL) have formed a caucus in the House of Representatives specifically to target the e-cigarette industry. But their anti-vape crusade restricts ECs without regard for who uses them and why. Their efforts should focus on keeping underage users away from e-cigarettes while securing the ability of smokers to access electronic cigarettes for harm reduction.

With this new literature review, the public health industry must recalibrate its position on electronic cigarettes and help smokers access harm reductive tools to quit their unhealthy smoking habits.

Elizabeth Sheld is the senior news editor at American Greatness and author of the “Morning Greatness” news update. She is a veteran political strategist and pollster who has worked on campaigns and public interest affairs. Liz has written at Breitbart, The Federalist and PJ Media. In her spare time, she shoots sporting clays and watches documentaries. Elizabeth quit smoking with Cuttwood Vapor’s Unicorn Milk.