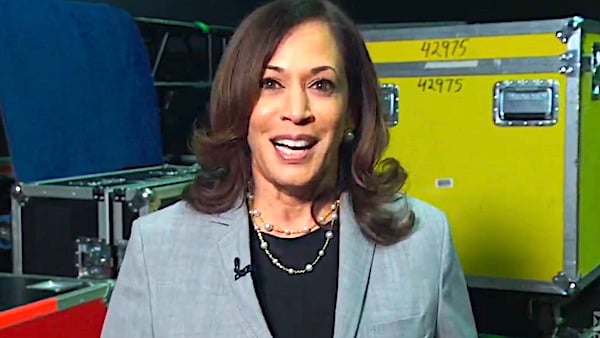 The principal of an elementary school in New York City has recorded a teacher leading her students "in a series of call-and-response chants" promoting Kamala Harris as "vice-president elect," reports the College Fix.

"You know, of course, what would happen if an elementary school teacher led children in a chant congratulating President Trump on reelection?" the report said.

“While I may be the first woman in this office, I will not be the last- because every little girl watching tonight sees that this is a country of possibilities.” Vice President elect, Kamala Harris ❤️✊🏾

The children recited a revised version of a poem from a 2017 book by Lesle Honore, which goes:

The children concluded by raising their arms and shouting, "Congratulations Kamala Harris!"

The College Fix noted the election results have not been certified, so referring to Harris as "vice president" and congratulating her is premature.

WND reported in 2009 that school children in North Carolina were told to chant about Barack Obama.

Within minutes of WND's inquiries, the video was set to private and several versions were removed completely.

According to Jan Blunt, spokeswoman for Buncombe County Schools, the clip was from a Parent Teacher Organization program about "heroes" performed by third-graders for their parents.

She said the children presented skits, songs and poems about heroes throughout American history and what they could do to be American heroes.

Blunt told WND, "The segment was less than one minute in length out of a 26-minute program which featured famous Americans of all colors and creeds, including George Washington, Amelia Earhart, Clara Barton and Martin Luther King Jr.

She said that as "the first African-American to be elected president of the United States, it was entirely appropriate to feature President Obama in the program along with other famous American leaders."

At the time, videos of children praising Obama were gaining widespread attention. Third-graders in New Jersey were taught to sing, "Mr. President, We Honor You Today" to the tune of the "Battle Hymn of the Republic."