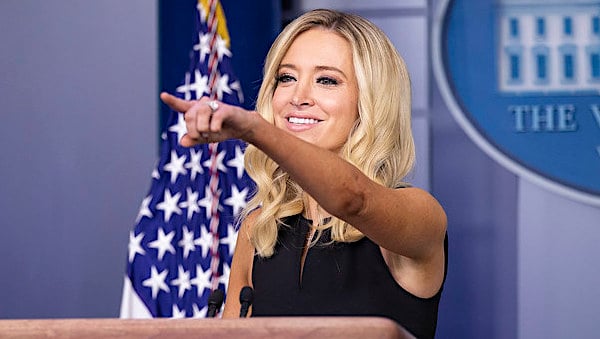 In journalism in America, the White House press corps is a prestigious assignment.

But a hot mic caught reporters goofing off in the White House breifing room, mocking Press Secretary Kayleigh McEnany and President Trump, according to a video posted by Climate Depot.

It began with a reporter saying:  "Hey guys. We're in the White House briefing room here. Press Secretary Kayleigh McEnany is going to hold her first briefing since October 1st and a lot has happened since then. The two-minute warning. The president has gotten COVID, she's gotten COVID, they've lost the election, and the president has refused to concede."

Male Reporter 2: “I’m sorry. That is excellent. They got COVID. They lost the election.”

Male Reporter 4: “To be determined.” [Laughter]

Female Reporter 3: “That was bad.”

Female Reporter 1: “I didn’t do that though."

The White House press corps has been combative with President Trump and his aides since before he was elected. Jim Acosta of CNN, in particular, has badgered the White House with questions such as, "Should the president tell the truth?" and "Did you blow it on COVID-19?" He once during a news conference refused to give up the microphone to another reporter.

Another has been Andrea Mitchell of NBC, who, during an interview with President Trump, refused to acknowledge the Barack Obama administration spied on the 2016 Trump campaign.

She's now claiming, notes Twitchy, that a Joe Biden administration won't be "political," in contrast to the Trump administration.

NBC's Andrea Mitchell cheers the Biden administration being "a big change" from the Trump team because they are "not going to be political" pic.twitter.com/rDDoioai47

Mitchell said Biden will appoint people who will tell him not what he wants to know, but what he needs to know.

She said that's a big change from the Trump administration, "where everything was political."