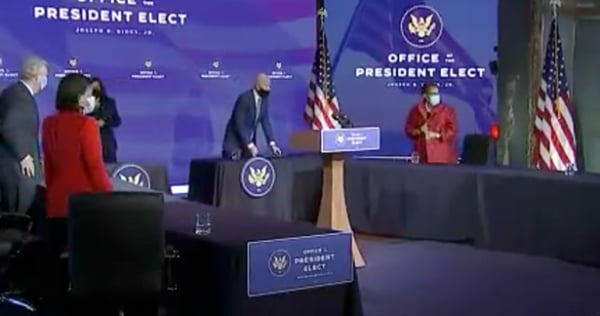 Joe Biden listens to a question from Fox News reporter Steve Doocy at an event in Wilmington, Delaware, on Dec. 11, 2020 (Video screenshot)

Two days after his transition team acknowledged the Justice Department is investigating Hunter Biden's "tax affairs," Joe Biden dodged a question from a reporter about the controversy.

"Did Hunter Biden commit a crime? Have you spoken to your son, Mr. President-Elect?" he asked.

On Wednesday, in a statement issued by the Biden-Harris transition team, Hunter Biden said the U.S. Attorney's office in Delaware told his lawyers his "tax affairs" were under investigation. His father said through an aide: "President-elect Biden is deeply proud of his son, who has fought through difficult challenges, including the vicious personal attacks of recent months, only to emerge stronger." The previous evening, WND reported two Republican-led Senate committees concluded that members of Joe Biden's family engaged in deals with Chinese nationals who had "deep connections" to the Communist Party.

During the second presidential debate, Biden fiercely denied charges presented by President Trump that had been supported by three years of investigative reporting by Peter Schweizer and others, Senate investigations and by new revelations in October from an abandoned Hunter Biden laptop along with the testimony and evidence from two former business partners.

"My son has not made money from China," Biden insisted during the debate.

"The only guy that made money from China is this guy," he said, referring to Trump. "The only one."

Biden noted there were 50 former national security officials, including five former heads of the CIA, who declared in a statement that the claims about Hunter Biden had the hallmarks of a Russian disinformation campaign. However, the officials admitted they had no evidence to back their claim and acknowledged that emails -- including those indicating Joe Biden not only knew about his son's lucrative deals but also profited from them -- were genuine.

"Both parties say what he's saying is a bunch of garbage," Biden said. "Nobody believes it expect him and his good friend Rudy Giuliani."

Joe Biden said during the second debate that Hunter had never made money in China and that the NY Post story was Russian disinformation.

His campaign surrogates also repeated the Russian disinformation lie in the lead up to that debate.

Do any journalists care? pic.twitter.com/fw3Y04qDY9

The Media Research Center produced a video montage of establishment media insisting in 2019 there was no evidence Hunter Biden did anything illegal. Then, in October, when they were confronted with new evidence, they declared in unison it was Russian disinformation.

The media will do anything to cover up and make excuses for the Biden Family.

2019: There is absolutely no evidence that Hunter Biden did anything illegal.

2020: The evidence that what Hunter Biden did was illegal is...Russian disinformation? pic.twitter.com/yqVf8gdBkQ

CNN's Christiane Amanpour chastised Republican National Committee spokeswoman Elizabeth Harrington after being asked why she would not report on a story about "one of the most powerful families in Washington."

"You're OK with our interests being sold out to profit Joe Biden and his family," Harrington said, "when we're suffering from a pandemic from communist China and he's doing shady business deals with communist China? And you're comfortable? OK?"

Amanpour replied: "As you know perfectly well, I am a journalist and a reporter and I follow the facts, and there has never been any issues in terms of corruption."

Harrington said as Amanpour tried to move on: "Wait, wait, wait. How do you know that?"

In October, after Twitter and Facebook censored bombshell New York Post stories, the New York Times and other news outlets insisted the messages and the laptop on which they were found could not be authenticated, publishing a story headlined "New York Post Published Hunter Biden Report Amid Newsroom Doubts." On Thursday, however, the Times said "Biden team has rejected some of the claims made in the Post articles, but has not disputed the authenticity of the files upon which they were based."

Conference calls leaked through Project Veritas captured CNN CEO Jeff Zucker telling his editors and producers he didn't want his network to go down the "Breitbart, New York Post, Fox News rabbit hole of Hunter Biden, which I don't think anybody outside of that world understood."

NPR explained to its audience its didn't "want to waste our time on stories that aren't really stories" and are "just pure distractions."

'They got Al Capone on tax fraud'

The federal grand jury impaneled to probe Hunter Biden's international business activities likely will examine why he was involved in lucrative deals, which could implicate his former vice president father, Schweizer said Thursday.

Reciting the old line that "they got Al Capone on tax fraud," Schweizer noted that criminal activity "often appears in clusters." He expects, therefore, the investigation of Hunter Biden's taxes eventually will address the fundamental question of what asset the former vice president's son brought to the negotiating table.

"He didn't have a skill set, he wasn't bringing capital to any of these investment deals, so what was he being paid for?" Schweizer asked in an interview with Fox News' Bill Hemmer.

Schweizer reported on the Biden family influence-peddling in his 2018 book "Secret Empires: How the American Political Class Hides Corruption and Enriches Family and Friends" and a follow-up, "Profiles in Corruption: Abuse of Power by America’s Progressive Elite," which presents evidence that five members of the Biden family "cashed in" while Joe Biden was vice president. Joe Biden's brother James also is under investigation, Politico reported Thursday.

The federal investigation into Hunter Biden, which began in 2018, goes beyond taxes, according to a source with firsthand knowledge of the probe who spoke to Politico. Along with the U.S. Attorney in Delaware's investigation of his taxes, the securities fraud unit in the Southern District of New York is scrutinizing his finances, and investigators in Delaware and Washington are probing potential money laundering and his foreign ties.

Schweizer pointed out Thursday that the U.S. has tax treaties with other countries, "meaning the level of information that can be obtained is much higher than if it were related to some other form of corruption."

Hemmer played a clip from Tucker Carlson's October interview with former Hunter Biden business partner Tony Bobulinski, who charged Joe Biden's claim in a presidential debate that he had no knowledge of his son's business deals was a "blatant lie."

Bobulinski, who attended the debate, said he "almost stood up and screamed liar and walked out, because I was shocked the Biden family was taking that position to the world."

The businessman said he met twice with Joe Biden "to discuss what I was doing with his family's name" and the firm CEFC China Energy, which has ties to the Communist Party. And it was clear, he said, that the former vice president was in charge of the family business enterprise trading off of his status.

Schweizer believes an independent prosecutor should be appointed prior to Jan. 20, because any attorney general appointed by Joe Biden will be looking over his shoulder.