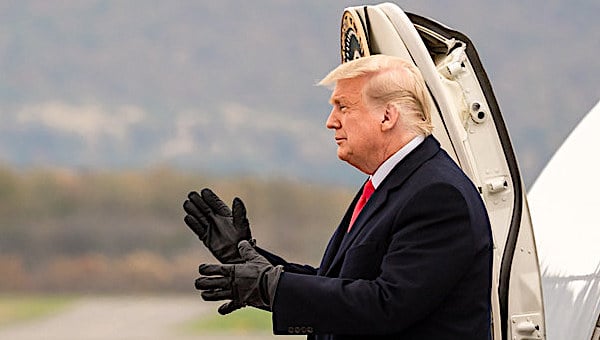 The casting of 306 Electoral College votes for Joe Biden on Monday has been widely regarded as the end of President Trump's challenges to the outcome of the 2020 election.

She said the Electoral College vote is only "one step in the constitutional process leading up to the Jan. 20th date," Inauguration Day.

"He is still pursuing ongoing litigation for this election," she said.

The Trump campaign has said the Republican slate of electors that cast votes in seven battleground states where Joe Biden won the popular vote could come into play when Congress certifies the electors on Jan. 6. Critics argue the Republican "electors" have no legal status because they were not designated by any state official. And under federal law, in case of a tie between the two chambers of Congress, the slates sent by governors prevail.

But the United States is a constitutional republic, not a majoritarian democracy, and the Founders gave the representatives of the people the responsibility to judge whether or not an election reflects their will.

Under the Constitution's 12th Amendment, if no candidate has a majority of Electoral College votes, the House would select the next president and the Senate would pick the vice president. In the House, each state delegation would have one vote. The Republicans have a 29-23 advantage.

Rep. Mo Brooks, R-Ala., is trying to build support for a challenge when the votes are read Jan. 6.

"The law is very clear," he said Monday in a Fox Business "Lou Dobbs Tonight" interview. "The House of Representatives in combination with the United States Senate has the lawful authority to accept or reject Electoral College vote submissions from states that have such flawed election systems that they're not worthy of our trust."

He said he's confident that if only lawful votes in the Nov. 3 election are counted, Trump would win the Electoral College.

"We should not be counting illegal votes and putting in an illegitimate President of the United States," he said.

To mount a challenge in Congress, Brooks would also need a senator to object. The New York Times reported Sens. Ron Johnson, R-Wis., and Rand Paul, R-Ky., have indicated they would be open to objecting.

However, there appears to be no support from Republican leadership in the Senate.

Sen. Mike Rounds, R-S.D., said it "does not sound to me like that would add any credibility to our electoral process."

Nevertheless, on Wednesday at 10 a.m. Eastern Time, the Senate Committee on Homeland Security and Governmental Affairs will hold a hearing to examine irregularities in the 2020 election.

Also, by Friday, Director of National Intelligence John Ratcliffe must issue a report on any foreign interference in the election, according to a 2018 executive order by President Trump.

The report to the president and several Cabinet members centers on "the extent to which any foreign interference that targeted election infrastructure materially affected the security or integrity of that infrastructure, the tabulation of votes, or the timely transmission of election results."

'Bedrock of the republic'

In his interview with Dobbs, Brooks argued the "bedrock of a republic is an honest and accurate voting system."

"And if you don't have an honest and accurate voting system, then you may as well throw out the claim that you’re a republic," he said. "You've lost that right. You’ve lost the control of your government."

Under those circumstances, Brooks said, "those who can steal the most votes, who can engage in the most voter fraud and get away with it are going to be the ones that rule the roost in Washington, D.C."

"That's not what our Founding Fathers wanted. That’s not what a million or so Americans who have lost their lives in wars wanted, giving us this Republic, this democracy where we could control our own fate and our own destiny."

Former Kansas Secretary of State Kris Kobach agreed in a Breitbart News interview on Tuesday "this isn't over yet."

"If something does happen where we have a big dispute all of a sudden, and this this thing gains momentum in Congress, it'll start to look like the Hayes-Tilden election of 1876, which is the last time that a disputed election went to Congress," he said.

"So hold on, get some popcorn, because this the show may continue."

Among the live legal cases:

Attorney Sydney Powell, who is not a Trump campaign lawyer, says she has cases in four states she is appealing to the U.S. Supreme Court. Among her claims is that Dominion Voting Systems machines were used to flip votes.

A forensic audit in a Michigan county where 6,000 votes were flipped from Trump to Biden concluded the machines were designed for fraud. In Arizona on Tuesday, the state Senate issued two related subpoenas. One calls for a scanned ballot audit for all mail-in ballots in Maricopa County. The other calls for a full forensic audit of ballot tabulation equipment.