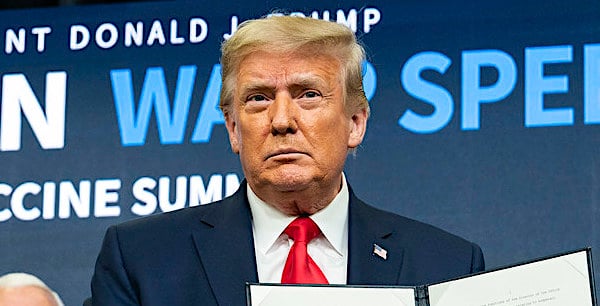 President Donald J. Trump displays his signature after signing an executive order ensuring that the American people have priority access to COVID-19 vaccines developed in the U.S. or procured by the U.S. government, at the Operation Warp Speed Vaccine Summit Tuesday, Dec. 8, 2020, in the South Court Auditorium at the Eisenhower Executive Office Building at the White House. (Official White House photo by Shealah Craighead)

After telling a CBS News reporter that Beijing interfered in the 2020 U.S. election, Director of National Intelligence John Ratcliffe has delayed issuing a required intelligence community assessment report because of clashes among senior officials over the communist regime's role.

"Ratcliffe has been really clear about his view that China is our top national security threat," a senior intelligence official told the Washington Examiner. "But ultimately, he's trying to ensure politics don’t play a role in what makes it into this report."

The official said that if there are "conflicting views among senior analysts about Chinese election influence, he wants both views to get a fair shake in the report." 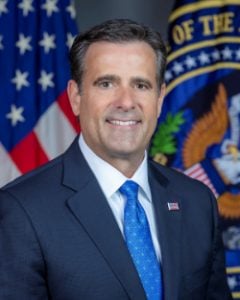 The report on foreign election interference, due 45 days after the election -- which is Friday -- is mandated by a 2018 executive order by President Trump. Anticipation of the report increased with the recent revelations of Chinese infiltration in Congress and the report that a China-linked bank invested in Dominion Voting Systems, whose machines used by 28 states are the target of vote-fraud accusations in numerous lawsuits.

However, an intelligence source told the Examiner the report will not focus on claims that voting machines flipped millions of votes or of mail-in ballot fraud.

The Cybersecurity and Infrastructure Security Agency said last month "there is no evidence that any voting system deleted or lost votes, changed votes, or was in any way compromised."

However, President Trump fired the agency's director, Christopher Krebs, charging his defense of the security of the election was "highly inaccurate."

On Wednesday, CBS News correspondent Catherine Herridge said Ratcliffe told her "there was foreign election interference by China, #Iran and Russia in November of this year, and he is anticipating a public report on those findings in January."

#BREAKING
CBS News Senior Correspondent @CBS_Herridge reports that @DNI_Ratcliffe has "told CBS News that there was foreign election interference by China, #Iran, and Russia in November of this year [2020]."

Four years ago, the intel community concluded Russia meddled in the 2016 election, bolstering the now debunked claims of Trump campaign collusion with Russia.

A DNI spokeswoman, Amanda Schoch, said Wednesday that career intelligence officials notified Ratcliffe that the Intelligence Community would not meet the Dec. 18 deadline. She said the IC "has received relevant reporting since the election and a number of agencies have not finished coordinating on the product."

The intelligence source who spoke to the Examiner said some analysts say China took numerous steps to influence the election, while others insist Beijing's intent wasn't to meddle or that it didn't carry out its plans.

The source said Ratcliffe wants all viewpoints reflected and there was a considerable amount of intelligence still coming in. 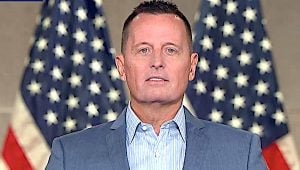 Former DNI Ric Grenell tweeted Wednesday that Ratcliffe "is standing up for career analysts who want their views to be accurately reflected."

"In other words, fighting to keep intelligence from being politicized," he wrote.

Ratcliffe told the Examiner earlier this month that there are analysts from the Cold War era who are accustomed to Russia being the biggest threat, or terrorism, "but the greatest threat that we face and a greater amount of our focus needs to be on China."

The Intelligence Community released an initial assessment on foreign interference in August that warned "many foreign actors have a preference for who wins the election" though "covert influence efforts are rarer."

William Evanina, the director of the National Counterintelligence and Security Center, said the assessment concluded China "prefers that President Trump, whom Beijing sees as unpredictable, does not win reelection."

"China has been expanding its influence efforts ahead of November 2020 to shape the policy environment in the United States, pressure political figures it views as opposed to China’s interests, and deflect and counter criticism of China," Evanina said.

Beijing, he said, has become "increasingly critical of the current administration's COVID-19 response, closure of China’s Houston Consulate, and actions on other issues."

Attorney General William Barr told CNN in September he believed China was the No. 1 threat regarding election interference.

The DNI said Iran, in an effort to damage Trump, was sending spoofed emails pretending to be members of the Proud Boys.