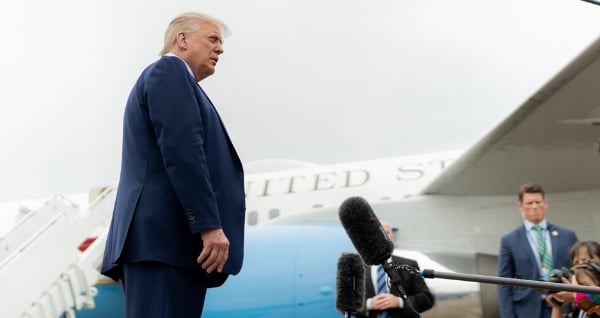 President Trump on Monday announced "big news" is coming from Pennsylvania after his legal team filed a petition with the U.S. Supreme Court in a case challenging the outcome of the 2020 election.

The president offered no further information.

At a public hearing held by Pennsylvania lawmakers and President Trump's campaign on Nov. 25, a witness drew gasps when he described "spikes" in the vote count the evening of the election in which Joe Biden gained 570,000 votes to the president's 3,200.

Meanwhile, a U.S. Postal Service contractor, Jesse Morgan, has claimed his trailer full of from 144,000 to 288,000 completed mail-in ballots disappeared after he delivered them from New York state to a Lancaster, Pennsylvania, depot.

The overnight spikes in Philadelphia and Pittsburgh reported at the November hearing came after Trump held a lead of some 700,000 votes. The official count ended with a Biden lead of some 80,000.

.@RudyGiuliani: Of the 600K votes added during curious "spikes" in PA, how many went to Biden?

Witness: "I think our figures were about 570-some-odd-thousand."

"And how much for Trump?

The complaint contends the change in laws violated Article II of the Constitution and the Bush v. Gore ruling in the 2000 presidential election.

The campaign wants to give the Republican-majority Pennsylvania Legislature the authority to vacate Joe Biden's Electoral College electors and select their own.