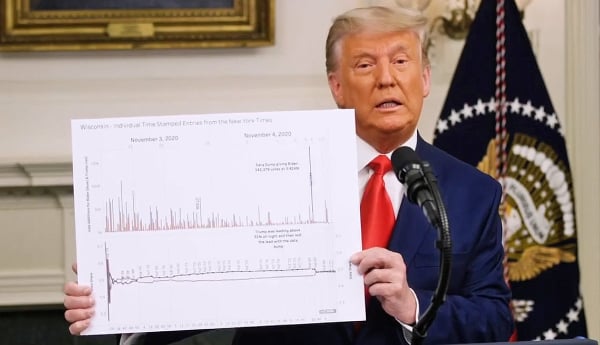 President Trump addresses the nation on his allegations of election fraud Dec. 22, 2020, in a Facebook video.

From his presidential podium at the White House, President Trump on Tuesday night vowed to continue pursing "every legal and constitutional option available to stop the theft of the presidential election," insisting Joe Biden did not win on Nov. 3.

"It did not happen. He did not win. We won by a landslide," said Trump in a video posted on Facebook.

Trump met Monday with about a dozen House Republicans who plan to object to certification of Electoral College votes in battleground states when Congress meets Jan. 6. On Wednesday, Trump is scheduled to meet with Republican members of the Pennsylvania state senate.

"If this egregious fraud is not fully investigated and addressed, the 2020 election will forever be regarded as illegitimate and the most corrupt election in the history of our country," Trump said.

He argued that Americans "must be able to have complete faith and confidence in our elections."

"The fate of our democracy depends upon it," he said.

The president urged citizens "to raise their voices and demand that this injustice be immediately corrected."

"We won this election by a magnificent landslide. And the people of the United States know it," he said. "All over, they’re demonstrating, they’re angry, they’re fearful. We cannot allow a completely fraudulent election to stand."

President Trump's case also was made Wednesday in a compilation of evidence by John Perazzo of FrontPage Magazine. The overview, Perazzo said, "will demonstrate, to anyone interested in following the truth wherever it may lead, that the 2020 presidential election was indeed rife with fraud, and that Joe Biden, if he should in fact be sworn into office next month, will be an illegitimate president from the very start."

"These glaring anomalies are just the tip of the iceberg," he said.

Trump noted he won 18 of 19 bellwether counties that have predicted the winner the past 40 years.

"We also won Florida, Ohio and Iowa by historic margins, meaning Biden would be the first candidate since 1960, and only the second candidate in American history, to win the White House while losing all three of those major states."

He also argued that with Biden at the top of the ticket, Democrats lost 25 of 26 "toss-up" House seats. Democrats were projected to gain 15 seats but instead they lost 14.

"No president has ever lost reelection while making such extraordinary gains across the board," Trump said. "There's never been anything like it."

He also cited the largest vote increase ever for an incumbent and the largest share of non-white voters for a Republican in more than 60 years.

Trump noted he did better with black and Hispanic voters everywhere in the country except for "a small handful of corrupt Democrat-run cities in key swing states, places notorious for fraud," naming Milwaukee, Atlanta, Philadelphia and Detroit.

"No president has ever lost election while making such extraordinary gains across the board," he said. "There's never been anything like it."

Statement by Donald J. Trump, The President of the United States

Art Moore
Art Moore, co-author of the best-selling book "See Something, Say Nothing," entered the media world as a PR assistant for the Seattle Mariners and a correspondent covering pro and college sports for Associated Press Radio. He reported for a Chicago-area daily newspaper and was senior news writer for Christianity Today magazine and an editor for Worldwide Newsroom before joining WND shortly after 9/11. He earned a master's degree in communications from Wheaton College.
@@arthurdmoore
N.Y. governor: Unvaccinated 'aren't listening to God'
CDC chief 'overrules her scientists' to back Biden booster plan
White House still insists Hunter laptop is 'Russian disinformation'
Biden: Border agents accused of whipping illegals 'will pay'
New study: Vaccine risks too high for children
See more...