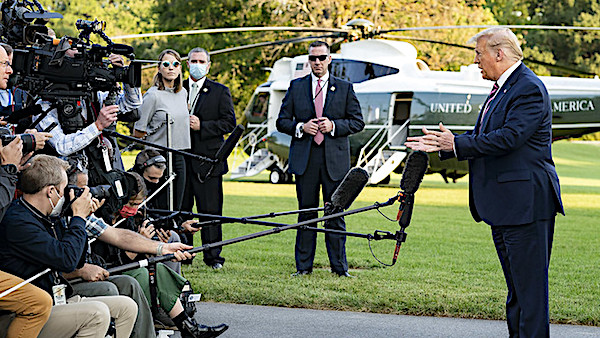 President Donald J. Trump talks to members of the press along the South Lawn driveway of the White House Tuesday, Sept. 22, 2020, prior to boarding Marine One en route to Joint Base Andrews, Maryland, to begin his trip to Pennsylvania. (Official White House photo by Joyce N. Boghosian)

The legacy of President Donald Trump will be measured against the diminishment of his enemies.

First — even before he was nominated — he broke the corrupt, elitist Republican Party. If you don’t think that is true, just ask yourself when was the last time you took Jeb Bush seriously.

Next, he maimed the corrupt, elitist Democratic Party, which was so fearful that it resorted to dirty tricks that would have made Dick Nixon blush. Crooked Hillary and her gang of globalists invented a plot to “vilify” Trump by linking him to a fake scandal “claiming interference by Russian security services.” Don’t take my word for it. That comes from a contemporaneous memo by Obama-era CIA Director John Brennan, and we don’t have to speculate about whether the plot came to fruition because the nation wasted more than two years and $32 million on a special-counsel probe to look into the fake allegations against Trump. Some taxpayers group really ought to send Hillary a bill.

After he took office, Trump was able to dismantle a large portion of the globalist infrastructure that had strangled much of U.S. sovereignty, like a political version of the Upside Down from “Stranger Things.” Paris climate accords? Buh-bye. Iran nuclear deal? Unh-uh. NATO allies skating on an IOU? Not gonna happen. Porous border? Build a wall. Mideast wars? Let’s try Mideast peace instead. Unfair trade deals? Return to sender. Chinese threats? Take this virus and shove it!

But Trump’s greatest victory, his most sublime contribution to American history, is his willingness to stand in the breach and fight mano a mano with the Fake News Media. He exposed the mainstream media as a fully owned subsidiary of the Democratic Party, and by never backing down when they lied about him, his family and his policies, he forced celebrity journalists into ever-more indefensible positions — until, by the end of his first term, they actually admitted that it was not their job to report the news.

Don’t believe me? Just read what National Public Radio passed off as an explanation in October about its refusal to cover a brewing political scandal when Joe Biden’s son Hunter was linked to a laptop containing potentially incriminating emails, intimate photos and more.

Yep, that was before the election, and the media had ample opportunity to investigate what looked like a virtual confession of unethical, and potentially criminal, activity involving not just Hunter but also possibly Joe Biden. But instead of working sources, studying documents and “following the money,” as Woodward and Bernstein did in Watergate, the Fake News Media went to ground and played possum till after the election.

Now, in the last week, we the people have suffered the indignity of being informed by the Biden “transition team” that Hunter Biden is under investigation for his “tax affairs.” Imagine that. The press release also informed us for some reason that Joe Biden is “deeply proud of his son.”

You can’t make this stuff up. Oh, wait, you can make it up because it sounds like the plot line from “House of Cards.” Absolute power corrupts absolutely. And if you believe that the media will suddenly start to play it straight now that they think Trump is gone, forget about it.

The media — along with Big Tech — think they elected a president. They think they own a president. They think that their suppression of news about Hunter Biden, along with their lies about Trump, made it possible for Biden to prevail against great odds. The last thing they will do is put that at risk, so now the news channels, the social media giants, and their partners in the Democratic Party have begun a massive gaslighting campaign to protect Biden’s apparent election victory despite overwhelming evidence of fraud. Rather than investigate claims of irregularities, the Fake News Media just denounces them as “baseless.” YouTube has even banned videos that claim Biden was elected as a result of fraud. What kind of free speech is this?

But there is evidence that what I call The Media Matrix is unraveling, thanks in large measure to Donald Trump’s war against Fake News. Too many people have taken the red pill and can no longer accept the lies of the mainstream media or the engineered algorithms of social media. The failure of the media to protect the people from the corrupt Biden family could be the final straw. If they lied about that, if they lied about Ukraine, if they lied about Russia, then why should we believe them when they insist that Joe Biden is president?

Even if Trump is unsuccessful in overturning the election results through his court challenges, there is no doubt that he has won the war against his mortal enemy. The Fake News Media now has no credibility at all whereas Trump’s legacy is secure. He fought for the people and he will be remembered by the people as their champion.

In olden days, leaders were often known by a popular title that symbolized their character or their place in history. You had Richard the Lionhearted, Louis the Do-Nothing, and Ivan the Terrible. If presidents were awarded a similar cognomen, then Donald J. Trump might be known as Donald the Restorer. If you preferred a name with a poetic lilt, you could easily make the case for Donald the Determined.

But I’ll go with a more mythic handle — one that seems appropriate for the man who single-handedly stood down the Fake News Media, fought the Big Tech oligarchs, survived an impeachment and brought peace to the bellicose Middle East — Donald the Dragon Slayer.

According to historian Ian Mortimer, the original dragon slayer, St. George, “stands for the courage to face adversity in order to defend the innocent.” For millions of Americans, that defines the Donald Trump we know and love. With nothing to gain, he fought for the forgotten Americans, for the deplorable and despised. He. Stood. His. Ground. And he taught us to fight back no matter the odds. He truly made America great again.