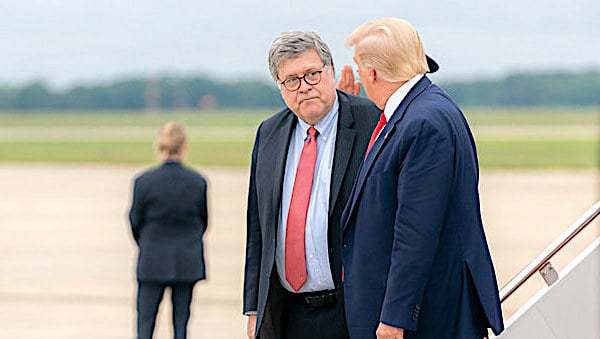 Barr, at a Justice Department press conference regarding new charges in the Lockerbie bombing case, insisted the DOJ's Hunter Biden probe, which began in 2018, is being handled "appropriately," the Hill reported.

"I think to the extent that there's an investigation I think that it's being handled responsibly and professionally currently within the department," said Barr. "To this point, I have not seen a reason to appoint a special counsel and I have no plan to do so before I leave."

President Trump announced last Monday that Barr submitted his resignation letter after a meeting at the White House about voter fraud allegations earlier that day. Barr's last day as attorney general is Wednesday.

Trump has discussed appointing a special counsel to probe evidence of Hunter Biden's finances and related charges of selling influence while Joe Biden was vice president and had foreign-policy authority over nations where lucrative business deals were made, including China and Ukraine.

Critics argue that if Joe Biden is inaugurated Jan. 20, his attorney general would have a conflict of interest, particularly since there is evidence that Joe Biden – in addition to serving as the premise for the business deals – has been personally enriched. Peter Schweizer, who has reported the story for several years, said Thursday that emails and text messages from Hunter Biden's abandoned laptop and other sources make it clear "he's also paying a lot of the family’s bills, including his father's and his mother's, with these foreign gains." Schweizer noted that emails – including one indicating Joe Biden was to get a cut of a China deal – and the testimony of former business partners such as Tony Bobulinski shows there's "no way" the former vice president didn't know about his son's influence peddling.

On Monday, Barr also said he saw no need for a special counsel to investigate claims of election fraud and saw "no basis" for a federal seizure of voting machines.

Trump personal attorney Rudy Giuliani called for the seizure, the New York Times reported, after a forensic audit of Dominion voting machines in Michigan concluded the equipment was designed for fraud.

"If I thought a special counsel at this stage was the right tool and was appropriate I would name one, but I haven't and I’m not going to," Barr said Monday.

When Trump announced Barr's resignation, he tweeted that had just had a "very nice meeting with Attorney General Bill Barr at the White House."

"Our relationship has been a very good one, he has done an outstanding job! As per letter, Bill will be leaving just before Christmas to spend the holidays with his family," Trump wrote.

However, Trump clearly was unhappy with Barr's declaration in an Associated Press interview earlier this month that the Justice Department had not found evidence of widespread fraud that would change the outcome of the election.

"I stand by that statement," Barr told reporters Monday.