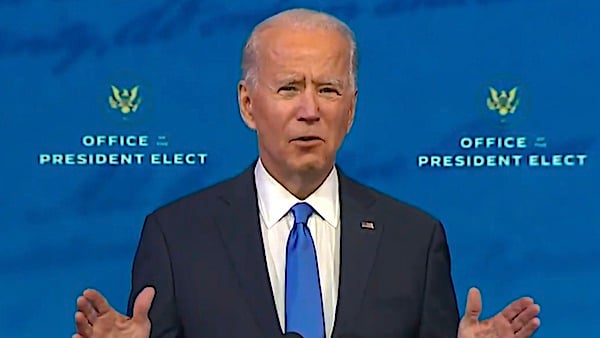 Joe Biden on Monday, shortly after the Electoral College voted 306-232 for him to be the next president, lashed out at President Trump for challenging the results in battleground states where more than 1,000 witnesses have testified in sworn statements of election fraud.

"In America, when questions are raised about the legitimacy of any election, those questions are resolved through a legal process," Biden said in a speech in which he repeatedly cleared his throat and coughed. "And that is precisely what happened here. The Trump campaign brought dozens and dozens and dozens of legal challenges to test the results. They were heard. And they were found to be without merit.

"Time and again, President Trump’s lawyers presented their arguments to state officials, state legislatures, state and federal courts, and ultimately to the United States Supreme Court, twice. They were heard by more than 80 judges across the country. And in every case, no cause or evidence was found to reverse or question or dispute the results," Biden said.

In fact, there are still some cases being appealed to the Supreme Court, and on Monday a forensic audit in a Michigan county where 6,000 votes were flipped concluded the Dominion voting machines used in 28 states were designed for fraud. In Georgia, a signature audit of absentee ballots will be conducted in Cobb County.

The suspicions of vote fraud began in the early morning hours after Election Day when counting stopped in four battleground states prior to massive vote dumps for Joe Biden.  Statisticians have described the circumstances as implausible at best. Witnesses reported Biden ballots being run through counting machines multiple times, postal workers reported being ordered to back-date Biden ballots that missed deadlines and more.

On Monday, Biden spoke from Wilmington, Delaware, where he had hunkered down for much of the 2020 campaign.

DailyMail.com called his speech an effort to call out Trump's "relentless effort to overturn the results."

"Respecting the will of the people is at the heart of our democracy, even if we find those results hard to accept," Biden said.

He didn't mention that his own party, including 2016 candidate Hillary Clinton, refused to accept Trump's victory and plotted his impeachment even before he was inaugurated.

The Democrats followed up with a years-long investigation of Trump-Russia collusion claims manufactured by Hillary Clinton's campaign followed by an impeachment drive that resulted in the president's acquittal.

DailyMail.com said that althought Biden "has tried to keep his focus on his agenda and on the coronavirus during many of his public remarks since networks called the race for him weeks ago, his Monday speech was an effort to put down a clear marker and establish the legitimacy of election."

And he praised the state and local officials who resisted Trump's efforts to investigate fraud allegations.

Biden explained he was fighting a cold, which was making his voice hoarse and causing him to cough throughout his speech.

He denigrated the legal challenges yet noted that 17 attorneys general across the nation, as well as 126 members of Congress, had joined the Texas case that went to the Supreme Court.

Trump, on Monday, said the fight was not over.

A polls showed nearly half of Americans believe the election was stolen, including 30% of Democrats.

"Now it is time to turn the page as we've done throughout our history, To unit. To heal," Biden said.

Sen. Lindsey Graham, R-S.C., argued there still are legal challenges that must be allowed to "play out."

Also on Monday, Republican electors in five disputed states cast votes for Trump. The Trump campaign said the alternate slate of electors preserved their legal options before the Jan. 6 deadline, when Congress certifies the vote.

White House aide Stephen Miller said the votes for Trump were recorded, and "we're going to send those results up to Congress."

"This will ensure that all of our legal remedies remain open. That means if we win these cases in the courts, we can direct that these alternate electors be certified," he said.