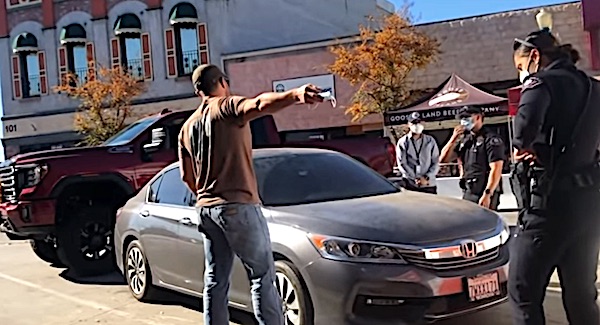 A California restaurant owner refused to move his vehicle blocking a health inspector’s car after the inspector said he would issue fines for outdoor dining violations, video shows.

Carlos Roman, owner of Bread and Barley in Covina, California, was issued a notice of closure by the health inspector forcing his business to close, video shows. The health inspector took photos of people dining outside and told Ramos that he would issue fines.

“This isn’t about me, they can’t pay their bills,” Roman said, video shows. “The cook just had a baby he’s with his family right now.”

An officer warned Roman that a tow truck was on the way to move his truck and asked him to step back and away from the health inspector, video shows.

Roman told officers that he was desperate to pay his bills and feed his kids, video shows. Roman eventually agreed to move his truck out of the way.

“We’re all in this together, we’ll just all starve to death and die,” Roman said, video shows. He criticized the officers and health inspector for receiving paychecks from the recently passed city budget

“The peace was kept and Mr. Roman’s vehicle was moved from the roadway, allowing the health inspector to leave,” Covina Police Sergeant-Community Impact Team David Rodriguez told the Daily Caller News Foundation. “We have no information on citations or fines issued by LA County Health Inspectors as they are a different entity.”

Restaurants are required to use physical barriers along with implementing social distancing and other cleaning procedures if allowing for indoor or outdoor dining according to the LA County Public Health Department.

The LA County Public Health Department did not respond to the DCNF’s request for comment.