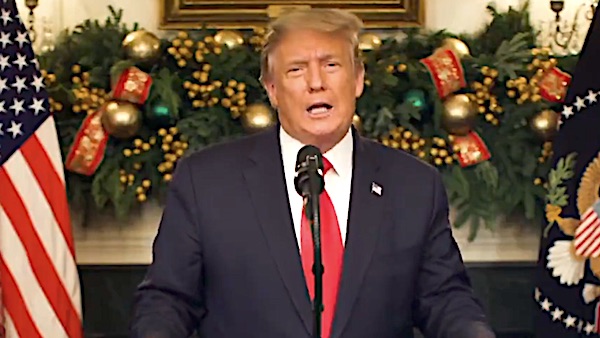 For months, House Speaker Nancy Pelosi has rejected plan after plan to send federal assistance to Americans struggling because of the government-ordered COVID-19 lockdowns.

Now, with the prospect of a Joe Biden presidency, she agreed to a deal issuing checks for $600 per person benefit after having refused $1,200 months earlier.

But she didn't count on President Trump and his demand for more money for Americans – $2,000 instead of $600.

So now the entire package – billions of dollars for other countries as well as the modest checks to Americans – is on hold.

The president spelled out his requirements in a video:

Statement by Donald J. Trump, The President of the United States

He wants "wasteful and unnecessary" expenditures to be dropped and the benefits for Americans to be increased.

"I am asking Congress to amend this bill and increase the ridiculously low $600 to $2,000, or $4,000 for a couple," Trump said in his Twitter video. "I'm also asking Congress to immediately get rid of the wasteful and unnecessary items from this legislation, and to send me a suitable bill or else the next administration will have to deliver a package, and maybe that administration will be me."

Congress had been counting on the bill sliding through. It offers a combination of the coronavirus stimulus package as well as funding for many other programs and special projects.

Trump drew accolades from some of the most progressive members of Congress, while others, more concerned about the fiscal impact, didn't endorse the plan.

Trump's statement was not a direct veto threat, and Congress likely would follow with an attempt to override.

He also could simply let it sit, which eventually would kill it.

In that case, Congress would have to start the legislative process anew.

House will try to amend the bill by unanimous consent.

Pelosi said House Democrats are ready to adopt the higher payments by unanimous consent, since many members already have left for Christmas.

National Public Radio said Trump caused "a new round of disarray" in Washington.

"The way out of Trump's criticism of the bill isn't clear with the clock running out on this Congress and most members now home for the holidays," NPR said.

"Trump's move also throws a wrinkle into the crucial Georgia Senate races that will determine control of the Senate during President-elect Biden's first term. Both incumbent Republicans, David Perdue and Kelly Loeffler, touted the bill, saying more help was finally on the way — and blamed Democrats for the delay," it continued.

The compromise plan was the result of negotiations among various factions in Congress and the Treasury Department.

CNN reported the division in Washington could result in a government shutdown.

Trump said: "A few months ago, Congress started negotiations on a new package to get urgently needed help to the American people. It's taken forever. However, the bill they are now planning to send back to my desk is much different than anticipated. It really is a disgrace."

The plan also has enhanced jobless benefits of $300 per week, rental help and billions of dollars for schools.

Talk-radio host Rush Limbaugh said the Washington establishment was surprised by the president's criticism because "they still don't know who Trump really is."

"Trump did what no other Republican managed to do, and he did it brilliantly in four minutes. He showed America who and what Nancy Pelosi and her Democrat colleagues are: Selfish, entitled, uncaring, elitist. Remember who Pelosi is," he said.

"Pelosi is the woman we saw standing in front of a $25,000 refrigerator eating gourmet ice cream during the middle of the pandemic, while Biden says the darkest days are ahead of us, while millions of Americans stood in food bank lines because their jobs were shut down because their governors and mayors were shutting them down because of the China virus."

If a last-minute deal isn't reached, he explained, Congress would have to return "from their vacations over Christmas to deal with this."

"In doing this, here’s Donald Trump, the outgoing president, sending a message to the American people who he is," he said. "That even after having been allegedly rejected by the American people, he is still looking out for them, he is still representing them. He is still putting them first. I mean, it would be easy for an outgoing president to say, 'I don’t give a damn. I don’t give a damn — 600 bucks, 600 schmucks, whatever I’m gonna do — I’m outta here.' But no, the president made a point, recorded a four-minute video," he said.