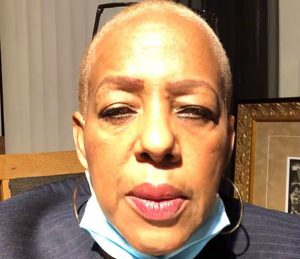 Calling on "soldiers" of the left to "make them pay," a Democratic state lawmaker delivered a threat to supporters of President Trump on Facebook Live.

Michigan state Rep. Cynthia Johnson prefaced her warning Tuesday with a wish that "I could be talking to y'all in a private room ... but we're public."

"So this is just a warning to you Trumpers. Be careful, walk lightly, we ain't playing with you. Enough of the shenanigans. Enough is enough," she said, emphasizing every word.

"And for those of you who are soldiers, you know how to do it. Do it right, be in order, make them pay."

She concluded: "I love you all. Bye bye."

On Wednesday, Michigan House Speaker Lee Chatfield announced Johnson had been stripped of her committee assignments in response to her threats.

"Threats to Democrats or Republicans are unacceptable and un-American. They’re even more unbecoming of an elected official," Chatfield said in a statement. "Rep. CA Johnson has been stripped of her committees and we're looking into further disciplinary action as the proper authorities conduct their investigations."

Johnson was vice chairman of Michigan's House Oversight Committee, which held a hearing led by the Republican majority on claims of vote fraud.

She says she received hundreds of angry voicemails, phone calls and emails after she criticized Trump personal lawyer Rudy Giuliani and other witnesses.

"And I know they're lying," she told Hall during the hearing.

This Michigan state Senator is the same one who asked witnesses who testified about voter fraud to dox themselves.pic.twitter.com/PVh4Xgcl2o

Johnson isn't the only Democrat to threaten Trump supporters.

Three days after the election, Democratic U.S. Rep. Alexandria Ocasio-Cortez called for compiling a list of social media statements by "Trump sycophants for when they try to downplay or deny their complicity."

Is anyone archiving these Trump sycophants for when they try to downplay or deny their complicity in the future? I foresee decent probability of many deleted Tweets, writings, photos in the future

Elie Mystal, the "justice correspondent" for The Nation magazine, called for establishing a South Africa-style Truth and Reconciliation Commission to "recover" from Trump and hold the president and his supporters "accountable for the crimes they have committed."

"I'm telling you. Remember the people who are enabling this fraud. They must answer for defending Trump's delusions," he said.

"Only exposure, pain, humiliation, and (inshallah) incarceration will lead to a moment of reckoning for the GOP," he wrote.

Wilson is a key advisor to the establishment Republican organization the Lincoln Project, which Twitter blocked for abusive doxxing of Republican lawyers supporting Trump election challenges.

"Remember, the Trump GOP is shorn of all ideological and philosophical pretense, and even when Trump leaves office, it’s not over," Wilson wrote. "His cultists' reign of terror will shape elected GOP members as long as he and his foul spawn walk the earth unpunished."

A federal judge allowed a firm to withdraw from a Trump campaign case after it came under attack by the Lincoln Project, the New York Post reported.

"Law is a profession, but these mega-law firms are also big businesses. Like any business, they can be held accountable by the public — and by their other customers," he said.

Harvard students, meanwhile, have asked university president Lawrence Bacow and other leaders to bar any former Trump officials and consultants from entering the campus until they are reviewed and vetted.