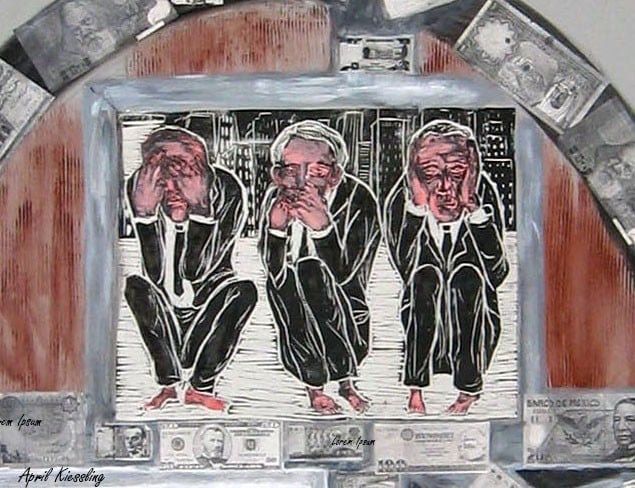 They say trauma brings back early childhood memories – especially bad ones, should you be unfortunate enough to have them. I certainly had my share and thought they were safely banished. But the turmoil of this election, with its repeated galvanic shocks, and its apocalyptic threats brings it rushing back. And suddenly I realized why.

At age 5, I spent a year with my grandparents, and they were anything but sweet and comforting old people. Especially my grandmother. She seemed an archetype of every diabolical villain culled from fairy tales or Disney movies: dogging my steps, hypercritical, implacable and apparently fixed on my destruction. Later, the family decided she was classically schizophrenic, hearing voices, delusions of grandeur and so forth. But to a small child, my grandmother was the Empress of Russia if she claimed to be – because no one ever denied that it was so. And because of this, it didn't occur to me for years that I could deny it either.

My grandmother's accusations were the worst of all. She claimed I stole her passport among other objects, although I had no idea what the thing was. From there, she insisted I was impersonating her (a 48-year-old woman!) with ensuing legal and social problems – all stemming from my behavior, but not hers. Confused beyond endurance, I grasped at anything to keep afloat. We were discouraged from questioning adults – so what was happening?

My eyes, ears and experience (short as it was) opposed every wild word from the mouth of this raving matriarch. No one wanted to listen to a child in those days, so to live with the emotional chaos, I decided she must be right. I was a thief. I was a hateful, manipulative child, clever enough to travel, to do business and to impersonate middle-aged adults. And I was also a liar since I denied it all! My memory must be awful, because I never remembered a thing – and all of this made me assume that I must be the mad one. My world was founded on the infallibility of adults.

It took years to overcome this abuse, and until the last few months I've felt nothing close to that level of turmoil, until November 2020. With the rest of you, I sat in stunned silence seeing everything collapse that we trusted in. I don't know if it was the sight of those unexplained and mathematically impossible vote changes we all saw in the dead of night. Or videos of GOP delegates locked out of their counting stations. Or thousands of individuals with no ballots, ballots already filled in, or finding that their dead parents had voted for years. Perhaps it was testimony of election officers and post office workers fearful for their jobs or their lives.

More likely the thing that shook to my core was the droning sound of governors, secretaries of state and legislators almost chanting their denials in unison. They didn't see it. They don't acknowledge the thousands of complaints. Millions of us protesting don't even exist! We are a figment of their imaginations, poor mad things. These were the people we trusted in high places. We gave them our confidence and left them responsible for the nation. We trusted them for news so we could make a living, assuming they were as professional and as just as we were in our pursuits. That was a grave mistake.

But now we find ourselves betrayed on a scale so vast that many of us can't believe that it is happening. It's easier to say, "I was mistaken; I never saw that." But that would be giving in to one of the most complex and evil plans in modern times.

For some time I hated my grandmother, until I realized how ill she was. If only that could explain the deconstruction of our 2020 elections! At the top, shrewd plotters engage with any agents who will help them. It's all about money and power, much uglier than mental illness. Caught in the crossfire are GOP officials who appear to have no courage or will. They look as shocked as a mafia son testifying against his godfather in court. Will they ever be able to sleep in peace?

We are being asked to meekly accept the results of this election as reported by media and parroted by craven officials. Fighting it brings on threats and contempt, but we have felt the sting of that whip for years. Submitting to their demands will make us true victims in a vast and deadly game of gaslighting. Will Americans wake up before the gas is real?

April Kiessling is a Christian, writer, artist, and mother (among other things). She has worked with The Columbian Newspaper, US Magazine, Daily Evergreen, WND.com, and published books – often using a pseudonym. Some of her writing is in textbooks (such as an Ernst Klett Verlag GmbH anthology for writing in English).