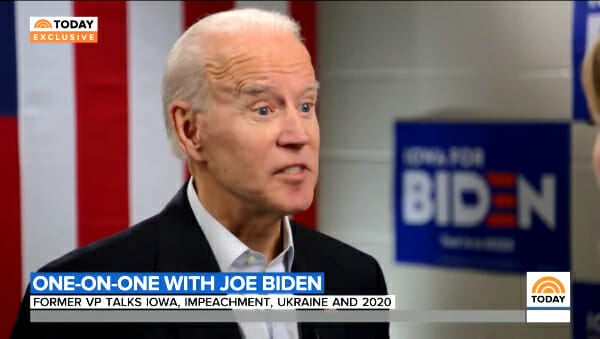 Emails obtained by the FBI from an abandoned laptop believed to belong to Hunter Biden show the former vice president's son strategized with a business associate to cash in on his father's upcoming visit to Ukraine, Just the News reported.

"The announcement of my guys (sic) upcoming travels should be characterized as part of our advice and thinking – but what he will say and do is out of our hands," Hunter Biden wrote.

He demanded an additional $25,000 a month from the Ukrainian gas company Burisma for his service on its board.

"The contract should begin now – not after the upcoming visit of my guy. That should include a retainer in the range of 25K p/m w/ additional fees where appropriate for more in depth work. … Complete separate from our respective deals re board participation."

The messages were exchanged with fellow Burisma board member and business partner Devon Archer not long before Joe Biden's scheduled April 21-22, 2014, visit to Kiev. As vice president, Joe Biden had been appointed to handle Ukraine policy for the Barack Obama administration.

"The memo shows Hunter Biden already knew he was going to be appointed to Burisma's board along with Archer in mid-April 2014 — a month before it was announced — and that he also wanted Burisma to pay an additional consulting fee to him or his law firm Boies Schiller Flexner, referred to in the emails as 'BSF,'" the report said.

Burisma at the time was under investigation by Ukraine's top prosecutor for corruption.

Joe Biden on video boasting that he threatened Ukraine's president with a loss of American aid if  he did not fire the prosecutor immediately.

See him on video:

Earlier this month, Hunter Biden announced he had been told by the U.S. Attorney's office in Delaware that his taxes were under investigation.

Just the News said it previously confirmed that Burisma paid Hunter Biden's law firm Boies Schiller Flexner $250,000 at the time of the negotiations. And it paid more than $3 million from 2014 to 2016 to Hunter Biden's and Archer's firm Rosemont Seneca Bohais.

The FBI got the email from a laptop hard drive believed to belong to Hunter Biden that was abandoned at a repair shop in Delaware. The shop owner, John Paul Mac Isaac, turned over a copy of the hard drive to FBI agents under a grand jury subpoena.

Joe Biden has previously insisted he knew nothing about his son's business operations, even though the two traveled together on Air Force Two to Beijing when Hunter Biden struck a $1.5 billion private equity deal secured by the state-owned Bank of China.

This week, Joe Biden again claimed – despite denials by the American intelligence community – that the information on the laptop was "Russian disinformation."

Just the News said that if the emails are corroborated by the FBI, they "would provide the most direct evidence to date of how Hunter Biden traded on his father's name to score business with a Ukrainian company run by an oligarch who was under criminal investigation at the time."

The report said that two days after the email, Archer visited Joe Biden at the White House.

In a memo, Hunter Biden discussed his other international deals.

"We could be invaluable in expanding their operations outside Uk [sic] by promoting their US partnerships and expertise - whether that's China, Mexico, other parts of the Black Sea, Poland," he wrote.

He also discussed getting paid for his China deal.

"We had assurances that the PRC money would come first, and we would build on that. Right now I don't see that happening," Hunter Biden wrote in mid-April 2014. "If they want us in Beijing once a month and pitching this outside PRC we should be getting paid in advance just like every other team member that's [sic] getting a salary."

The Wall Street Journal reported it reviewed interviews, documents and communications that show Hunter Biden's family name was at the center of his deals with tycoons in China and elsewhere.

After releasing the report, Sen. Chuck Grassley, R-Iowa, said, "Joe Biden has a lot of explaining to do."

Schweizer, who has reported on Biden family influence peddling for several years, said recently emails and text messages from Hunter Biden's abandoned laptop and other sources make it clear "he's also paying a lot of the family’s bills, including his father's and his mother's, with these foreign gains."

"This is an issue of enrichment involving Joe Biden himself," he said in an interview with Fox News' Sean Hannity.

Messages between Hunter Biden's business partners, he said, show "how the Biden family actually operates in this commercial space."

Schweizer said Joe Biden is trying to distance himself from his son's business deals, but "that's just not simply how the family has operated."

"And that needs to remain front and center as we look to a Biden administration ahead."

On Tuesday, when a Fox News' Peter Doocy asked Joe Biden about the scandal, he insulted the reporter.

Doocy asked, "Do you still think the stories from the fall about your son Hunter are Russian disinformation and a smear campaign like you said?"

"God love you, man. You're a one-horse pony" -- Biden to @pdoocy of Fox News as Doocy asks him about Hunter Biden while he walks off the stage pic.twitter.com/GfF6ZsRL21