A claim repeated by a Texas elector that Chief Justice John Roberts was heard from an adjacent room at the Supreme Court building screaming at colleagues for considering the Texas election-fraud case has a fundamental flaw.

The justices have been meeting remotely for the past two months during the COVID-19 lockdown.

"This is an absurd fantasy," said Ed Whelan, the president of the Ethics and Public Policy Center, of Patrick's claim.

"For starters, the Justices haven't been having in-person conferences," tweeted Whelan, a former clerk for the late Justice Antonin Scalia.

The Supreme Court posted a statement on its website Oct. 9 that said: "The Court will hear all oral arguments scheduled for the November and December sessions by telephone conference. In keeping with public health guidance in response to COVID-19, the Justices and counsel will all participate remotely. The oral arguments are scheduled to begin at 10 a.m. On days when more than one case will be heard, there will be a three minute pause before the second case begins."

Later Friday, a Supreme Court public information officer said the justices have been conducting conferences by phone since March.

With C-SPAN cameras rolling during the Electoral College vote on Monday, Patrick cited a "report" he read "online" from a "current staffer for one of the Supreme Court justices."

The report said the nine justices went into a closed room to discuss cases, and when the Texas case was brought up, the staffer said, in Patrick's words, he "heard screaming through the walls as Justice Roberts and the other liberal justices were insisting that this case not be taken up."

Patrick said Roberts reacted to Justices Alito and Thomas bringing up the Bush v. Gore 2000 election case, yelling "I don't give a *** about that case, arguing "at that time, we didn't have riots." 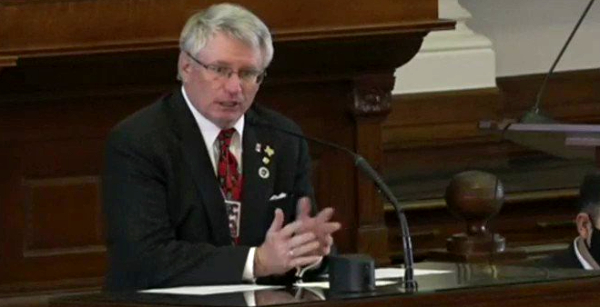 "So what he was saying was that he was afraid of what would happen if they did the right thing," Patrick said. "And I'm sorry, but that is moral cowardice."

He said the charge of the Supreme Court is to be "our final line of defense for right and wrong, and they did not do their duty."

This is an absurd fantasy. For starters, the Justices haven't been having in-person conferences. https://t.co/G7Pl6ORkNf

The "online" report Patrick cited apparently was a Dec. 12 article published on the website of the "Hal Turner Radio Show" titled "Loud Arguments in US Supreme Court Chambers over Texas Lawsuit – COURT INTIMIDATED," based on a "source deep inside the US Supreme Court."

Art Moore
Art Moore, co-author of the best-selling book "See Something, Say Nothing," entered the media world as a PR assistant for the Seattle Mariners and a correspondent covering pro and college sports for Associated Press Radio. He reported for a Chicago-area daily newspaper and was senior news writer for Christianity Today magazine and an editor for Worldwide Newsroom before joining WND shortly after 9/11. He earned a master's degree in communications from Wheaton College.
@@arthurdmoore
'History will sort it all out': See Hillary in 2019 charge Trump stole election
Hacked files reveal severity, scope of China's persecution of Uyghurs
Newspaper hammers archbishop for barring Pelosi from Communion
Hillary led 'most successful disinformation campaign' in U.S. history
Critics warn feds will use 'domestic terrorism' law to silence dissent
See more...