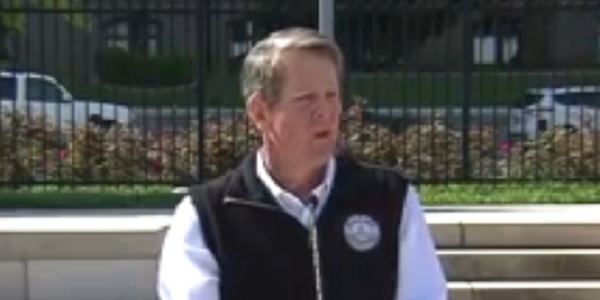 Georgia Republican Gov. Brian Kemp has asked his secretary of state to conduct a signature audit of the ballots cast in the 2020 presidential election after evidence was presented that President Trump's personal lawyer Rudy Giuliani called a "smoking gun."

The evidence is in a video, posted on Twitter by the Trump campaign, that was introduced at a hearing held Thursday by the Georgia State Senate on allegations of vote fraud. It shows poll workers being told to go home but several remaining behind. When they are alone, they pull out suitcases from beneath a table that contained ballots and begin counting them.

Attorney Jacki Pick described the video at the hearing.

"The same person that stayed behind, the person that cleared the place out under the pretense that we are going to stop counting is the person who put the table there at 8:22 in the morning," she said. "I saw four suitcases come out from underneath the table."

The Washington Examiner reported Kemp, who has been criticized by President Trump for his handling of the election, told Laura Ingraham at a Fox News town hall Thursday night he was troubled by the evidence.

"I called early on for a signature. Obviously the secretary of state, per the laws in the Constitution, would have to order that. He has not done that. I think it should be done," Kemp said of Georgia Secretary of State Brad Raffensperger.

"I think especially what we saw today, it raises more questions. There needs to be transparency on that. I would again call for that. I think in the next 24 hours, hopefully, we will see a lot more from the hearings that the legislature had today, and we will be able to look and see what the next steps are," the governor said.

"FINALLY Georgia Governor Brian Kemp is calling for a signature audit. What took him so long??? This is BASIC election integrity ignored until now," she said.

According to the state's certified count, Joe Biden won by more than 12,000 votes.

The president, citing evidence of vote fraud affecting hundreds of thousands of votes across six swing states, has declined to concede. In several states, the Trump campaign is arguing in court that state laws were violated to allow mail-in balloting.

Georgia will hold two runoff elections Jan. 5 that will determine control of the U.S. Senate. If the Democrats win both races and Joe Biden is inaugurated, Kamala Harris' vote as vice president would give the Democrats a majority.