2020 has been one of the strangest years in American history – from the sham presidential impeachment, to the coronavirus pandemic and economy-destroying national lockdown, to widespread hysterical demands to “defund the police” while Marxist mobs burn and loot American cities, to Big Tech scandalously suppressing journalism it doesn’t like, to Big Media openly siding with the senile and corrupt Joe Biden while portraying President Donald Trump as a mentally ill, white-supremacist dictator, to November’s breathtakingly rigged election – likely the most crooked and corrupt in U.S. history.

And in between these wall-to-wall crises, blue-state mayors and governors still found time to close churches while keeping strip clubs open, destroy as many small businesses as possible while encouraging rioting, and threaten law-abiding citizens with arrest and imprisonment for having too many people in their home for Thanksgiving.

The widespread anxiety, confusion, distrust and most of all, anger and fear resulting from these developments all but guarantees ongoing division and violence throughout America, if not outright civil war.

But apparently that’s not enough for today’s arrogant “leader” class.

Right now, under cover of the COVID pandemic, global elites, including right here in America, are actively engaged in ushering in a completely new world system they call the “Great Reset.”

That’s the topic of the sensational new issue of WND’s acclaimed monthly Whistleblower magazine, titled “THE GREAT RESET: How American and global elites are leveraging COVID to socialize the world.” 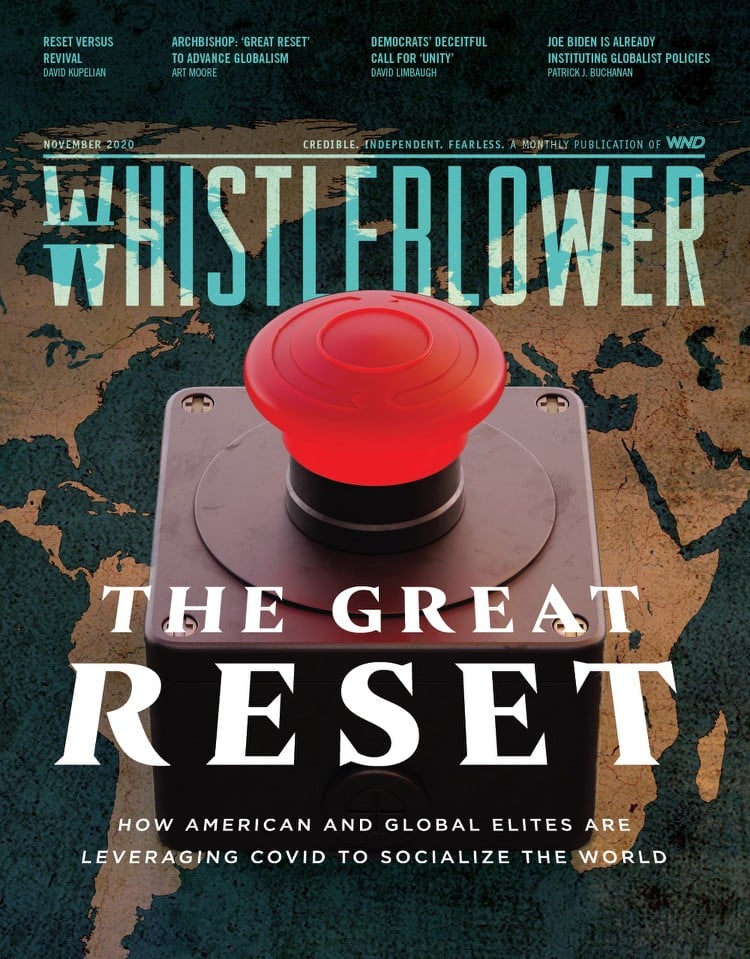 The first and most pivotal phase of the Great Reset plan under cover of COVID is, of course, winning the 2020 presidential election through a dizzyingly multifaceted attack on the integrity of the U.S. election system itself, in conjunction with a unified campaign by Big Media and Big Tech to elect Joe Biden at all costs.

Biden is fully on board with the “Great Reset.” In fact, the Biden presidential campaign chose as its official campaign slogan the seemingly innocuous phrase, “Build Back Better,” which happens also to be the slogan of the “Great Reset” coined by its originator and main advocate, World Economic Forum founder Klaus Schwab.

Under cover of the COVID-19 pandemic, Schwab insists the entire world must “act jointly and swiftly to revamp all aspects of our societies and economies,” meaning, as he explains, “we need a ‘Great Reset’ of capitalism.” In other words, socialism.

“Every country,” insists Schwab, “from the United States to China, must participate, and every industry, from oil and gas to tech, must be transformed.”

Prince Charles is a key advocate for the Great Reset, as is International Monetary Fund chief economist Gina Gopinath, U.N. Secretary General António Guterres, as well as heads of many major corporations, including Microsoft.

Former U.S. Secretary of State John Kerry is all in, recently exclaiming: "The notion of a reset is more important than ever before. I personally believe ... we're at the dawn of an extremely exciting time." And Canadian Prime Minister Justin Trudeau is remarkably frank about the subterfuge under which the global reset elites are operating: “This pandemic has provided an opportunity for a reset. This is our chance to accelerate our pre-pandemic efforts to reimagine our economic systems that actually address global challenges like extreme poverty, inequality and climate change.”

Unfortunately, as Whistleblower shows, the world’s elites do not really want equality for everybody. Historically, from Stalin to Mao to Chavez, Marxist/socialist leaders have never been truly interested in everyone being equal. That’s just happy-talk to seduce the masses. What they want, first and foremost, is power, they want wealth and privilege for themselves, they want glory, they want revenge on their enemies, and they want worship.

“In a word,” writes Whistleblower Editor David Kupelian, “they want to be gods. The original temptation in the Garden of Eden was, ‘Ye shall be as gods.’ (Genesis 3:5) But when humans try to become gods, they turn into devils. And the agenda planned by these would-be rulers is both insane and evil.”

Highlights of “THE GREAT RESET” include:

“The great war in which Americans are engaged is not left versus right, Democrat versus Republican, or Trump supporters versus Biden supporters,” says Kupelian. “Rather, it is one of good versus evil. And as usual, it features a great evil masquerading as noble and good, while accusing what is good and decent of being immoral and reprobate. It’s a classic case of projection – evil pretending to be good while condemning good as evil. That’s what “THE GREAT RESET” is all about.

Being a Secret Service agent is one of the most treacherous jobs in the world and never more so than in today’s highly polarized America. Facing threats from fence jumpers and manifesto writers to fanatical terrorists and sophisticated spies, protecting the president is harder than ever.In an age of hyper-partisan politics, emotions are high and crazies are a dime a dozen. On top of that, with international tensions reaching a boiling point, it’s harder than ever to determine friend from foe.

If you prefer, you may order a single copy of the November 2020 issue, "THE GREAT RESET." Or GET THE DIGITAL VERSION HERE!