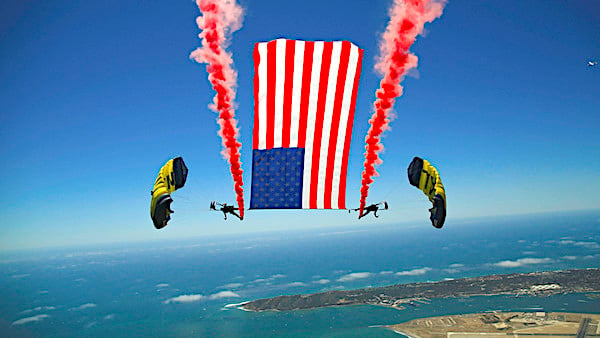 It can’t be psychologically healthy for a people to have difficulty loving their country. It cannot be socially desirable because it makes it difficult for us to unite in common purpose. But honesty compels us to admit that, within the progressive mainstream that seeds our popular and academic culture, Americans find it difficult to say that they love America. Or if they do say so it is a declaration buried beneath a pile of provisos.

New research from More in Common bears this out. Their data indicates that a mere 34% of progressive activists are “proud” of being American. Some 30% of Americans generally do not feel pride in America, including 30% of African Americans.

Gratefully, most Americans of all colors do take pride in this country. But there too we find a problem. Many of us are offended by our countrymen’s inability to recognize the simple greatness of the United States. Who would dare take a knee when the moment comes to honor the country that has done more than any to advance the cause of human liberty? What could be more patriotic than to hold such dissension in righteous contempt?

We hold each other in contempt for not loving America enough, or for loving her too much or too thoughtlessly. But there is a patriotic corrective for these overwrought points of view. The answer to them is empathy. More specifically, America needs a patriotism that is empathetic.

Patriotic empathy is what those of us for whom conspicuous love of country comes easily need to hold for those whose relationship to America feels more complicated.

Conservatives are right, in my view, to object to a representation of America that declares it as being wholly defined by its historic evils. But few of us are so far removed from history that it has no bearing on our vision of the present.

The injustice of Jim Crow segregation, the assassination of Dr. Martin Luther King Jr., rest in living memory for millions of Americans who were affected by them. These memories are passed down to the children and grandchildren of African Americans who suffered discrimination, of civil rights workers of all colors who experienced backlash and ostracization for their efforts. Stories and memories join stream with recent and current events (the slaughter of worshipers at Emanuel AME Church in Charleston, S.C., the march of white supremacists in Charlottesville, the death of George Floyd) to construct a narrative that is compelling to the imagination even if it is too simple to capture our larger reality.

For the conservative imagination is likewise bound to the stories of history even as those who reject the critical narrative of the activist left tell a different tale. Theirs is a tale of triumphing over tyranny. Of sacrifice on the beaches of Normandy. Of outlasting the evil empire. The stories of our ancestors and the heroes of previous generations come down to many Americans today as sanctification of a legacy of freedom that we must continue to defend. And defend it we must.

But our grandparents did not suffer in the fields of France or the mountains of Okinawa so their grandchildren could find themselves at odds with the children of those who bled on the Edmund Pettus Bridge.

The American story on balance is full of heroes who fought for our country against her foes beyond our borders just as it is full of heroes who dared confront her sins and demons from within. It is possible in our time to be so enthralled with the history of America’s demons that we see evil when it isn’t there. So too is it possible to be so enamored with the legacy of America’s achievements that we close our ears to arguments identifying injustices that remain.

Patriotism calls us to love America. Empathy asks us to understand our fellow Americans. There is no conflict between the two.

John Wood Jr. is a national leader at Braver Angels, a nonprofit devoted to depolarizing America. He is the former vice chairman of the Republican Party of Los Angeles County and a speaker on the topics of political and racial reconciliation.