Last week I discussed the Great (Dystopian) Reset being pushed upon America (and the world). Coupled with increasingly draconian lockdowns from hypocritical politicians and an apparent determination to crash the U.S. economy, my husband and I have come up with our own personal game plan for the foreseeable future.

Yes, we're escaping. For nearly 30 years, first in rural Oregon and later in rural Idaho, we've taught ourselves to become self-sufficient. Now we plan to launch ourselves into this lifestyle with a new seriousness in a new location.

Last year – long before the madness of 2020 hit – we decided it was time to downsize from our 20-acre Idaho farm. Over the years, we had turned the property into a self-sufficient homestead capable of complete food self-sufficiency (beef and dairy cattle, chickens, wheat, orchard, garden, etc.). This was the point we emphasized to prospective buyers. It took almost 18 months to sell (a surprising number of people were intimidated by what we'd accomplished), but we closed two weeks ago to an enterprising younger family that relishes personal freedom.

Meanwhile, we made an all-cash offer on a smaller farm in an even more remote corner of our beloved Idaho. This isn't just any ol' piece of property, either. We knew precisely what we were looking for – in particular, the potential (once again) for complete self-sufficiency. This new property is not ideal in every respect, but as should be abundantly obvious by now, Utopia doesn't exist. It does, however, hit many of our requirements – including being far off the beaten track. Far off.

See this photo? We're smack in the middle of one of the darkest parts of the nation: 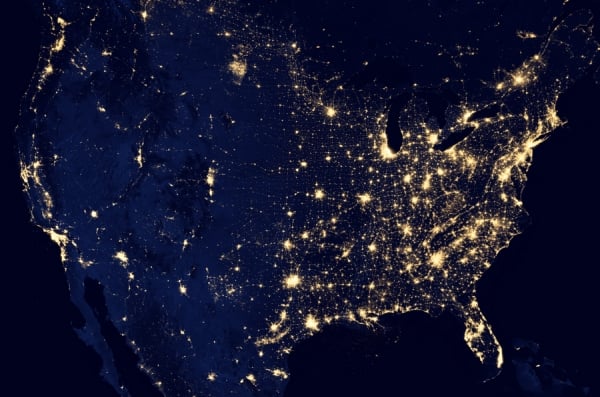 Once this purchase closes, we'll melt away into the wilderness and labor to turn our parcel, once more, into a self-sufficient homestead. We've done it before. We can do it again.

We had this move planned for nearly two years, so it wasn't triggered by the events of 2020. However, everything that's happened in the last year has certainly added fuel to our fire. The election was the final spur. Why?

Well, consider. If Biden is declared the election winner, America is over. I don't need to waste column space to list the innumerable ways in which a Biden-Harris administration will turn America into a socialist hellhole run by extremists, where "unity" means "Shut up and do what we say." There's nothing worse than fundamentalist liberalism, and we aim to get far, far away from it.

But even if Trump is declared the election winner, things won't necessarily improve. Having been led down the primrose path by the liberal press and social media that the Bad Orange Man will be out of office, many far-left activists will be taken by surprise. As a result, blue cities will explode in violence and become more uninhabitable than they already are. The furious and illegal efforts to make sure a conservative politician never sets foot in the White House again will make the last four years look like a cake walk.

"Sure, in the back of everyone's subconscious there is the fear that the good times are an illusion and that dystopia is just behind a thin veneer of economic stability and false optimism," observes Brandon Smith on Alt-Market, "but most people do not really think such catastrophes will happen in their lifetime. We are now in the midst of a deliberately over-hyped pandemic, strict national lockdowns, civil unrest, riots, aggressive tech censorship, intrusive government censorship, unprecedented corporate and treasury debt, stagflationary central bank stimulus and the collapse of massive financial bubbles. Yet, I still don't get the impression that many in the public really grasp the extent of the danger; they still believe that the situation is going to heal itself without any effort or much sacrifice on their part. This is the first lesson of power: Entire societies can be easily influenced when they suffer from delusions that the bad times will be fleeting, and that governments will keep them safe no matter what."

It's not just the election or political overreach that concerns us. It's the potential for an economic collapse as fiat currencies destabilize and world governments play god with money. It's the urging of the World Economic Forum to eat weeds and drink reclaimed sewage water.

To this new homestead, we take with us our freelance work, decades of experience in low-tech living, and an advanced degree in frugality. We are positioning ourselves to require as little income as possible (right now we can live comfortably on $1,000 a month; our goal is to halve that). We also have nearly three decades of skills in small-scale farming, animal husbandry, food preservation and resource management.

In this interest, we are not alone. America is experiencing a "Great Relocation" as urbanites flee troubled cities by the millions (we talked to dozens when they inquired about our property). It took 2020 for them to realize just how dangerous it is to be dependent on other people for the basic necessities of life. It's why garden seeds sold out in the spring and canning supplies sold out in the fall.

Inadvertently, Idaho has become the refugee state for conservatives from all over the nation. Fortunately, it's a big state, with lots of places to sink into the wilderness. Having lived here 17 years, we're familiar with many of those areas. Now we're doing just that – sinking into the wilderness.

They say the worse things get, the smaller your focus should be. We can't control what happens in America, nor can we control the outcome of the election. But we can control how we react. It means being a few steps ahead of others. It means filtering out the things we can't change and focusing on the things we can. We can't save the world, so we'll shrink our focus.

If this game plan sounds like hell to you, that's fine. If you believe our game plan is silly and overdramatic, that's fine, too. You're welcome to stay where you are. We each choose the hill we want to die on. This is ours.

For those who accuse us of cowardice and say we shouldn't run and hide, let me be clear: There is nothing my husband and I can do to change the course of this mighty ship. Instead, we're going to spend our golden years building up our new homestead and continuing toward becoming what I call "anti-fragile." Our farm will become an oasis of self-sufficiency, and a refuge (if necessary) for our adult children and some very select friends.

No less a luminary than Thomas Jefferson believed America was incapable of true democracy unless 20% of its citizens were self-sufficient on small farms. This would enable them to be real dissenters, free to voice opinions and beliefs, without any obligation to food producers who might hold their survival at stake. So we look upon our decision to opt out, not as an act of cowardice, but an act of patriotism.

If I'm tasked to "do my part" to save America, then this is my calling: To teach others to be less dependent and more self-sufficient on their own small farms, in accordance with 1 Thessalonians 4:11-12. We each have our gifts, and mine isn't marching in the streets. It's writing. It's helping people realize the benefits of independence and self-sufficiency. Your gifts will be different, but as long as they're for the glory of God, that's what matters.

So that's our game plan for the next few years. What's yours?

Do you appreciate WND's unfiltered hard-hitting news and commentary? Read us AD-FREE by becoming a WND Insider! Find out more.

Patrice Lewis
Patrice Lewis is a WND editor and weekly columnist, and the author of "The Simplicity Primer: 365 Ideas for Making Life more Livable." Visit her blog at www.rural-revolution.com.
Hobbits, unite!
Viva la (quiet) Revolución
Musings on modern art
Why we prefer tangible investments … like cows and blueberries
Come in from the cold
See more...