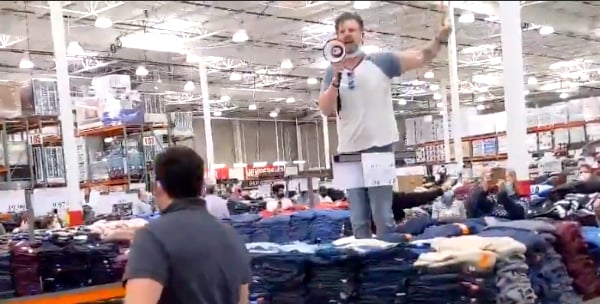 With a clothing table as his platform, a California Costco shopper declared through a bullhorn he's had enough of Gov. Gavin Newsom's coronavirus orders.

In a video that went viral on Twitter, the man urged fellow Californians not to give in to the lockdown and mask orders.

"You must not do this. If you continue, this is the life that you will have," he said as a Costco employee moved shoppers away from him.

"Don't tell me I don't have a right," he said to apparent pushback. "Gov. Newsom doesn't have the right to make you wear a mask.

"We've got to stand up for ourselves, because the governor is going to keep us locked down until we do something about it," he said. "And I want to know, are you going to let this happen?"

One Twitter user called him "the hero we need" and another said "God bless that man," noting the suicide rate "has skyrocketed since the lockdown and no one talks about it."

Many Californians are questioning the sincerity of their leaders and "the science" upon which their policies are based.

A reporter for the Los Angeles Fox TV affiliate discovered after asking the L.A. County Board of Supervisors to provide evidence to support its shutdown of outdoor dining that there was none.

Now, Gov. Newsom's health secretary, Dr. Mark Ghaly, has admitted outdoor dining is low risk for the spread of the virus, but shutting down restaurants is about keeping people at home.

Even Joe Biden's coronavirus adviser was once against lockdowns, warning in a March 21 op-ed for the Washington Post of the high economic and social costs of "the near-draconian lockdowns" in effect at the time in China and Italy, which ultimately don't reduce the number of cases.

In a July podcast that resurfaced last week, White House coronavirus adviser Dr. Anthony Fauci admitted the widely used PCR tests pick up harmless fragments of the coronarvirus, resulting in many false-positive cases that result in overstating the threat. In August, the New York Times examined PCR testing data in three states and found "up to 90 percent of people testing positive carried barely any virus."

WND reported last week a study published by the peer-reviewed journal Nature found no transmission of the coronavirus among people in close contact with asymptomatic patients.