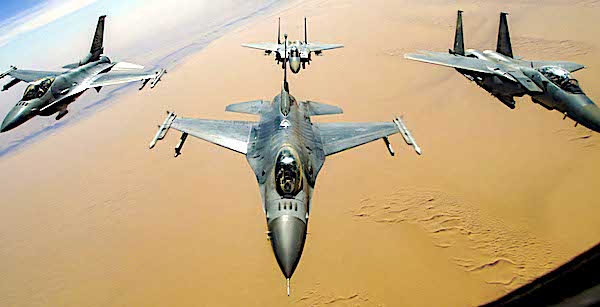 The Syrian Democratic Forces are executing a new series of raids against active ISIS-affiliated militants in eastern Syria with the support of the U.S., VOA News reported Sunday.

The new campaign targets ISIS remnants in the Deir al-Zour province near Iraq, VOA News reported. The Kurdish-led Syrian Democratic Forces (SDF) military alliance is focusing on ISIS cells in the northern part of the province.

“On December 26, our Special Forces and International Coalition Forces arrested a member of a terrorist cell north of Deir al-Zour, during a joint raid operation,” the Syrian Democratic Forces (SDF) said in a statement, VOA News reported.

The SDF along with the U.S.-led Global Coalition to Defeat IS performed other raids on Sunday, VOA News reported.

Recently, ISIS cell activity has increased, an explosive device targeting an SDF vehicle killed one person and injured another in the province on Saturday, VOA News reported. ISIS fighters have increasingly targeted Syrian troops and allied militias in central Syria.

SDF counterterrorism units apprehended six ISIS fighters near the Deir al-Zour and Hasaka provinces, according to VOA News. The U.S.-led coalition said local allies are important in the fight against ISIS cells.

“As our partners continue to show their capabilities in the fight, it is important for the Coalition to continue to build relationships as part of (its) support (for) stabilization,” the coalition said in a statement.

Our partners in NE Syria remain an important part of the fight to #DefeatDaesh. As our partners continue to show their capabilities in the fight it is important for the Coalition to continue to build relationships as part of #SupportToStabilization. pic.twitter.com/YVLbvihukw

ISIS militants continue to attack civilians and SDF forces in eastern Syria despite losing physical territory in March 2019, according to VOA News. Though ISIS does not currently hold territory in Syria or Iraq, it’s likely that the group will continue plotting major attacks in both countries, experts say.