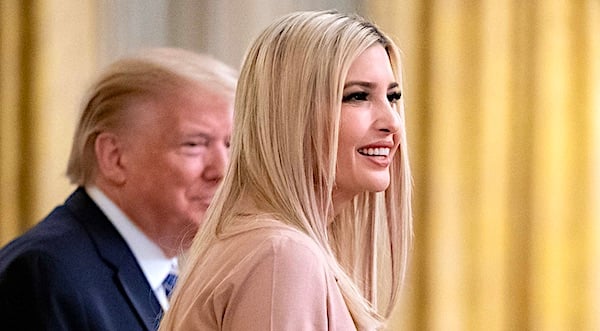 President Donald J. Trump listens as Adviser to the President Ivanka Trump addresses her remarks at an event supporting our nation's small businesses through the pay check protection program Tuesday, April 28, 2020, in the East Room of the White House. (Official White House photo by Tia Dufour)

Ivanka Trump announced Monday that she will postpone scheduled appearances for Georgia Senate campaign events because of the expected COVID-19 relief package vote in Congress, the Hill reported.

“Excited to be in Fulton City, GA this AM for an Early Voting event [email protected] & @Perduesenate! Due to the COVID relief vote today, we’ll be postponing the rest of today’s events,” President Donald Trump’s daughter tweeted.

Excited to be in Fulton Cty, GA this AM for an Early Voting event w @KLoeffler & @Perduesenate! Due to the COVID relief vote today, we’ll be postponing the rest of today’s events.

We must focus on what’s most important- support for hard working Americans. Relief is on the way!

Trump’s daughter and incumbent Republican Georgia Sens. David Perdue and Kelly Loeffler planned to be in a Monday campaign rally in Walton County and go to Suwanee, the Hill reported. The senators changed their plans and are expected to be in Washington D.C. to vote on Congress’ COVID-19 relief bill.

Senate leaders announced Sunday that congressional leaders had reached a deal on a COVID-19 relief package. The compromise prevailed over numerous stalemates regarding the Federal Reserve’s lending powers and direct money payments to Americans, the leaders said.

A Georgia GOP spokesperson said the campaign rally will still happen despite Trump, Loeffler and Perdue’s change of plans, the Walton Tribune reported.

Loeffler and Perdue are competing against Democratic candidates Raphael Warnock and Jon Ossoff respectively for Georgia’s senate seats. The two races on Jan. 5 determines what political party controls the Senate.

Donald Trump Jr. campaigned in Georgia last weekend and the president will campaign for the Republican senators on Jan. 4, the Hill reported.

Harris called off an event in Suwanee and plans to campaign for Warnock and Ossoff in Columbus, The Hill reported. Polls show the race is close between the candidates.

The Georgia Republican Party and the Trump campaign didn’t immediately respond to requests for comment.