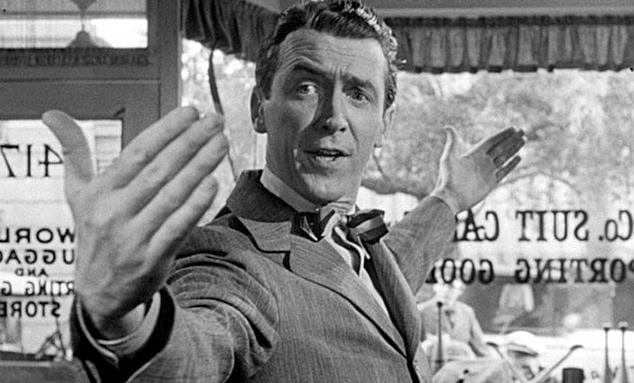 Around this time of year, the American public is inundated with a slew of holiday movies, most notably “It’s a Wonderful Life,” that are loosely based on the premise of Charles Dickens’ “A Christmas Carol.”

You know the drill: A once decent, hardworking person has become so obsessed with some ambition that he or she has lost sight of the important things in life. Only divine intervention can turn things around.

Well, Joe Biden, this is your life!

You wanted to be the president so bad that you ran three times — in 1988, 2008 and 2020. Along the way, you sold your soul to the devil (or at least to the Chinese) and though you barely missed it, now the payment is coming due. You don’t know all the details, but that song by Charlie Daniels keeps playing on a loop whenever you look in a mirror — “The devil went down to Georgia,/ He was lookin’ for an election to steal/ He was in a bind ’cause he was way behind/ And he was willing to make a deal.”

Like a specter of all the presidents past, your old buddy Barack sounded a warning last year: “You don’t have to do this, Joe,” but that wasn’t true. You did have to. You wanted it so bad you could taste it.

Power. Fame. Money. You already had all those. You were a senator for 30-plus years. But you wanted more — much more — and then you hit the jackpot. Obama had asked you to join him in the White House as vice president. That was heady stuff. Suddenly you were in demand. Not just one out of a hundred as you were in the Senate, but one heartbeat away from the Oval Office. One whisper away from the president’s ear. You could convert that into more than a meal ticket. This was the big enchilada. Finally, you could put your ne’er-do-well boy Hunter to work -- schmoozing and partying around the world with your phone number for sale — and all you had to do was show up. You were good at that. You had made a career of that. Tell a story, crack a joke, smile and sniff the girls’ hair, and then back into the limo for the next stop.

It wasn’t always that way. If the official narrative can be credited, then the former vice president is the salt of the earth — a decent man who rose up from humble beginnings in Pennsylvania and Delaware to find himself in the corridors of power in Washington, D.C., for the past 47 years because he wanted to make a difference, because he cared about the average working stiff.

So what happened? How did Regular Joe Biden become so corrupted along the way that he is now convincingly referred to by Sean Hannity and others as the head of the Biden crime family? Therein lies the story, and our tale of potential redemption.

Let’s suppose that the scheming, manipulative dark forces that surround Biden in the Democratic Party succeed in installing him in the White House on Jan. 20, 2021. What happens then? How will divine intervention work to bring him back to the light?

In our version of “Scrooged,” President Biden toddles off to bed the night of his inauguration and has a terrible nightmare, during which Kamala Harris cackles something about an offer he can’t refuse:

“You don’t have to resign, Joe. Not yet. Just do what I tell you, and you can keep playing house in the White House for many months to come. No one has to know about your problems, but if you step out of line, there’s a little something called the 25th Amendment. Never tried, but true.”

Joe screams and startles awake, but it seems like Harris isn’t a real monster after all -- she’s just the result of indigestion: “An undigested bit of beef, a blot of mustard, a crumb of cheese, a fragment of underdone potato.”

Joe falls back to sleep after taking a bicarbonate of soda, but when he wakes again he discovers that his nightmare is just beginning. The special counsel that President Trump appointed on his way out the door to investigate Hunter’s troublesome laptop is starting to make life difficult. Just how many incriminating emails could one recovering crack addict hoard on a hard drive anyway? It seems like there is a never-ending stream of leaks going to Newsmax and Fox. (By the way, what circle of hell is reserved for popinjays at the DOJ who leak to Fox News? The audacity!)

The weeks and months that follow are not pleasant ones for Joe Biden, his son Hunter or his brother Jim. It turns out that Trump was right about how hard it is to govern when you are under investigation for being a foreign asset. Fortunately, Joe’s friends in the media and in Silicon Valley still have his back, but the screws are tightening. People are starting to talk. It is particularly awkward that Trump appointed a second special counsel to investigate election fraud. There was little chance anyone would ever be able to prove anything with 100% certainty, but when more than a third of the voters believe you cheated your way into the White House, it makes it hard to put together legislative majorities for anything other than declaring Juneteenth a new national holiday.

Perhaps worst of all, no one on his team had thought of stealing elections in local races across the country, so he is saddled with Republican legislatures in a majority of states working to redistrict U.S. House seats and guaranteeing that the last two years of his term will be served with a Republican-controlled House of Representatives. Sure, he talked a good game about bipartisan government, but he preferred a bipartisan government with a Democrat majority.

How long does it take for the new Republican speaker of the House to convene an impeachment inquiry into Biden Inc.’s connections to the Chinese Communist Party or even into “the most secure election in U.S. history”? (God, that was a good line — he needed to remember to thank his Pulitzer Prize-winning speechwriter for that one again!)

Is there any chance he can stay in office till the end of his first term? Probably the only thing protecting him is his “insurance policy.” By selecting Kamala as his vice president, he had guaranteed that his good buddies in the Senate would never convict him of anything. There was no way they would let a socialist become president! Heck, that’s how he convinced them to stop Bernie!

Only one small problem. If they impeached him, they could impeach Kamala too. She was part of the same deal: On election night they had all gone to bed well behind, but with smiles on their faces. When they stopped counting votes in all the swing states, he knew it would turn out fine. Reminded him of a sad song he used to know. “It’s a quarter to three./ There’s no one in the place except you and me./  So set ’em up, Joe./ I got a little story I think you should know.”

Unfortunately, he isn’t the only one who knows that story. There are a lot of people who know what happened in the wee hours of the morning of Nov. 4, 2020. And in this nightmare scenario where Joe Biden becomes president of the United States, there is always the chance that sooner or later someone will decide to talk. Maybe a lot of someones. And then it was all over.

“We're drinkin', my friend, to the end of a brief episode/ Make it one for my baby and one more for the road.”

This, of course, is where President Biden is supposed to wake up and discover that it’s still the night before Inauguration Day after all. In the tradition of these holiday movies, our hero now has a chance to save his soul: Should he go through with the worst mistake of his life or turn over a new leaf and order a Christmas goose for Bob Cratchit and his family? If Joe gets a look at the way his presidency and his life might unravel over the next four years, it just might scare him straight before he has to live out the terrible consequences of his wrong choices.

So our story ends with a moment of redemption after all.

“I wish I was never elected president in the first place,” Joe shouts.

Don’t worry. You weren’t! Now, call the attorney general and tell him you have a little story you think he should know. Get it off your chest. Remember, it’s a wonderful life — if you do the right thing.