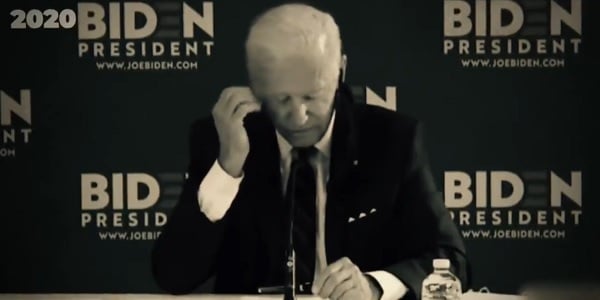 Joe Biden said in a CNN sit-down interview Thursday night along with Kamala Harris that if he has a "fundamental disagreement" with his vice president "based on a moral principle, I'll develop some disease and say I have to resign."

"All kidding aside, it's a matter of the thing, we are sympatico on our philosophy of government, sympatico on how we want to attack, approach these issues that we are facing," he said.

Neither the context of the statement nor the tone indicated Biden was joking, however.

He said that when he and Harris disagree, "it'll be just like, so far it's been just like when Barack and I did. It's in private."

He said he and Harris agree on many things.

Joe Biden is asked about his disagreements with Kamala Harris on certain issues:

"Like I told Barack, if I reach something where there's a fundamental disagreement we have based on a moral principle, I'll develop some disease and say I have to resign." pic.twitter.com/SLcvrwaPCA

"This is why he doesn't do interviews because he is so incoherent; this is why they kept him in the basement for the majority of the campaign," he said.

Jones noted Biden campaigned as a "moderate," but Harris is on the far left of the party's "progressive" base, so "policy disagreements are likely to arise."

"She disagrees with him on virtually every single issue."

"That's such a dishonest thing to do to the American people. Instead of coming out and saying, look, I disagree with the president, and, I am resigning because of that. You want to fake some kind of illness?"

Columnist Michael Schisler warned months before the election that the ticket actually was "Harris-Biden."

"Biden-Harris may be on the ballot, but it's a classic bait-n-switch in progress. It's actually Kamala Harris who the Democrats have put forth in their quest for power, not Joe Biden," he said.

"Both candidates have alluded to as much in their public statements about a Harris-Biden ticket, so we can dispense with any notion that Biden will ever govern as president, elected or not."

Schisler said that while Biden "now scrambles thoughts, words and sentences like so many eggs under the whisk, Democrats need Biden to be the 'moderate' Trojan horse that sneaks the radical Harris into the White House. Democrats' answer to Biden's obvious problem? They've placed him on political life-support. They've put him on a teleprompter."

He said a "Harris administration" is the "Democrats' true objective."

Democrats already, he said, have "at least two plans at their disposal for dispensing with the geezer. How do we know this? Because they've already used these two plans on the current guy. First, there is no shortage of dirt on old Biden concerning his extortion of Ukraine. The old gaffe machine even bragged about it on camera. Does anyone in his right mind think that Adam Schiff wouldn't initiate impeachment proceedings against Joe Biden if old Joe decides he wants to be a 'real' president?

Second, Democrats have been talking about invoking the 25th Amendment on the current president, and they would do it, he said, if Joe Biden decides he wants to actually be president.

"All Democrats have to do is march old Joe in front of the cameras and pull the plug on the teleprompter; the entire nation will be begging for his removal."