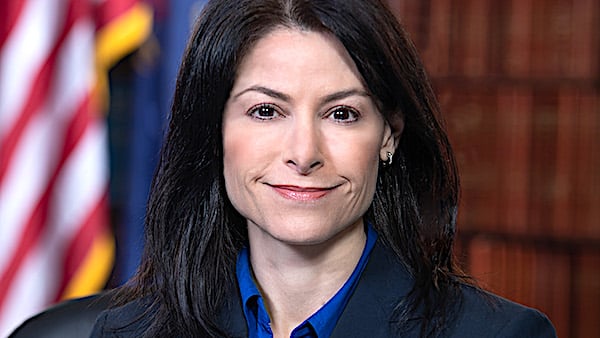 The top law-enforcement officer in the state of Michigan is looking to punish lawyers who have challenged the results of the 2020 presidential election, claiming the lawsuits include "intentional misrepresentations."

"You know if you will have your name attached to it, and you have made intentional misrepresentations of facts to the court, I absolutely believe that you ought to be held accountable," Nessel told reporters, according to Michigan Radio.

Nessel indicated she's looking to file complaints with the Attorney Grievance Commission, based on her belief the lawsuits challenging the outcome for Biden contain intentional disinformation.

While no lawyer was specifically named, Nessel said she'll pursue "any" attorney who questioned the legitimacy of the vote tabulation, according to Michigan Radio.

Sunday morning, President Trump commented on the controversy, tweeting: "These lawyers are true patriots who are fighting for the truth and, obviously, getting very close. AG should be sanctioned. Fight on!"

Nessel's remarks this week came as the city of Detroit and an attorney for Wayne County voter Robert Davis "took their own steps in search of sanctions against lawyers involved in one of the cases to overturn the state's presidential election," the Detroit News reported.

Davis' filing states the court needs to sanction "the egregious conduct of the plaintiffs and their attorneys for making clearly frivolous arguments and using the judicial system to obtain unprecedented relief, to satisfy plaintiffs' selfish and destructive political agendas."

His motion cites a section of law permitting a judge to require lawyers to pay "excess costs, expenses and attorney's fee" for conduct that "multiplies the proceedings in any case unreasonably and vexatiously."

"It is unfathomable that licensed attorneys would deliberately file false and misleading affidavits and pleadings with the Court in an effort to disenfranchise millions of Michigan residents," Davis said. "Not only should these individuals and their attorneys be assessed financial sanctions, but they also should be barred from practicing in the federal courts in the Eastern District of Michigan."

The Detroit News reported the attorney general's requests for sanctions "will likely be made after the cases have been closed out."

"Some of these cases where we know for a fact there were intentional misrepresentations made -- the kind of misrepresentation that there is no question of fact that these were inaccurate statements that were presented to the court -- yes, myself and also Secretary Benson, will be filing complaints to the Attorney Grievance Commission," Nessel said.

"I think we need to go back to a time where you can trust an attorney is making an accurate and truthful representation to the court because if they don't, then they won't be able to practice law anymore," she added.