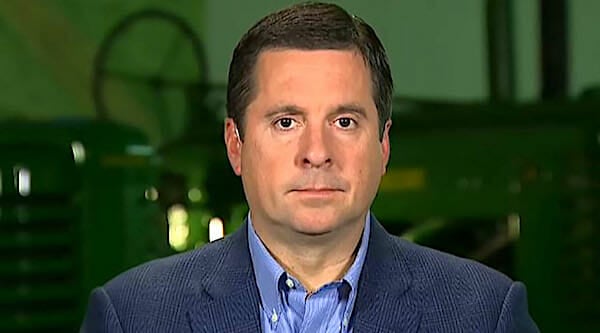 Rep. Devin Nunes, the top Republican on the House Intelligence Committee, said Sunday he plans to make new criminal referrals to the Justice Department following the release of internal FBI messages from the account of Peter Strzok, the top FBI investigator on Crossfire Hurricane.

In an interview on Fox News’ “Sunday Morning Futures,” Nunes said the messages, which the Justice Department and FBI declassified earlier this month, should have been provided to Congress years ago when Republicans began investigating whether the FBI abused the Foreign Intelligence Surveillance Act (FISA) in order to surveil Trump campaign aide Carter Page.

“They knew that we were investigating FISA abuse, why would this not have been given to Congress? This is just another example we’re going to have to do another criminal referral,” Nunes said Sunday.

The messages in question are from Strzok’s Lync account, the FBI’s internal messaging system. The messages, which The Daily Caller News Foundation published on Thursday, show Strzok discussing details of Crossfire Hurricane, the FBI’s counterintelligence investigation of the Trump campaign.

The messages show Strzok, who was fired from the FBI in August 2019, commenting on July 28, 2016, about open counterintelligence investigations related to Trump. The FBI has insisted that the bureau was not investigating Trump before Strzok opened Crossfire Hurricane on July 31, 2016.

Nunes has long doubted the FBI’s official claims about the beginning of its investigation of the Trump campaign.

Did the federal government intentionally mislead Congress in this case?
99% (536 Votes)
1% (4 Votes)

He said Sunday that Strzok’s messages show the FBI’s narrative “was always nonsense.”

Strzok sent a message to another FBI employee on Sept. 23, 2016, asserting that former British spy Christopher Steele had spoken to a news outlet regarding a dossier he compiled on Donald Trump in order to “influence” the FBI’s investigation.

The Justice Department inspector general blasted the Crossfire Hurricane team for withholding exculpatory information regarding the Steele dossier in its applications for FISA warrants against Carter Page.

Nunes did not identify who he plans to refer for criminal investigation, but he asserted that Justice Department and FBI officials lied to Congress regarding the existence of documents like the latest batch of Strzok messages.

“This is clearly lying and obstructing Congress. This is information that we asked for numerous times,” Nunes said.

Nunes has submitted more than a dozen other criminal referrals to the Justice Department regarding the investigation of the Trump campaign. He has called for probes into leaks to the media regarding Trump associates, and has also issued referrals on FBI officials discussed in the inspector general’s report on Crossfire Hurricane.

The status of those referrals is unclear, though many of the issues in the referrals appear to be part of an investigation led by U.S. Attorney John Durham into the origins of the Trump-Russia probe.

Nunes also said that Durham has enough evidence to issue indictments for lying to Congress.

“I don’t see how John Durham can’t bust several people for lying and misleading Congress. At a minimum there ought to be several indictments on that.”

Republicans who have investigated the FBI’s abuse of FISA and the Steele dossier have accused Steele, a former MI6 officer, of lying to the FBI regarding his contacts with the media. Sens. Chuck Grassley and Lindsey Graham referred Steele to the Justice Department and FBI for investigation in January 2018.

Other Republicans have accused Glenn Simpson, the founder of Fusion GPS, which hired Steele to investigate Trump on behalf of the DNC and Clinton campaign, of potentially making false statements to Congress regarding his interactions with former Justice Department official Bruce Ohr.

Simpson testified in 2017 that he did not meet Ohr until after the 2016 election. Ohr told Congress that they met in August 2016 to discuss Fusion GPS and Steele’s investigation of the Trump campaign.

Grassley said in a letter sent Dec. 3, 2018 that Simpson made “extremely misleading” statements in a deposition before the Senate Judiciary Committee on Aug. 22, 2017.