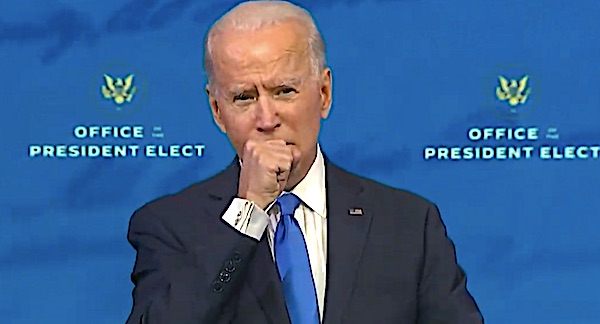 Joe Biden coughs and clears his throat numerous times as he claims victory in the Electoral College on Dec. 14, 2020. (Video screenshot)

Joe Biden has "a lot of explaining to do" regarding his role in his son's business deal with a Communist Party-linked Chinese energy firm and other profiting in foreign nations from the former vice president's status, charged Sen. Charles Grassley, R-Iowa, on the Senate floor Tuesday.

Grassley, the chairman of the Senate Finance Committee, joined with Senate Governmental Affairs Chairman Ron Johnson, R-Wis., in an investigation that concluded Hunter and and Joe Biden's brother James Biden "essentially served as agents of the communist government."

"Based on all the facts known to date, Joe Biden has a lot of explaining to do," Grassley said, addressing his colleagues.

Considerable evidence has emerged that the "Hunter Biden scandal" is really about Joe Biden and whether or not he is beholden to America's No. 1 enemy. Former Hunter Biden business partner Tony Bobulinski, who has been interviewed by the FBI, claims he met twice with Joe Biden amid the crafting of the deal with CEFC China Energy. And an email to Bobulinski from a partner indicated Joe Biden was to receive a cut.

A newly leaked email reported Monday indicates Hunter Biden asked for a key to be made for his "office mate" father at a work space he planned to share with a Chinese partner in his CEFC deal. Emails from an abandoned Hunter Biden laptop reported in October by the New York Post indicated Joe Biden not only knew about his son's lucrative deals, contrary to repeated claims, but also profited from them.

For the second time since his transition team announced his son is the target of a Justice Department investigation, Biden dodged a question from reporters about the issue.

On Monday night, after Biden declared victory in an address to the nation, a reporter shouted, "When did you find out your son was being investigated?"

Biden said: "Thanks for the congratulations. I appreciate it."

Last week, to a similar question, he said, "I'm proud of my son."

Hunter Biden acknowledged last Wednesday in a statement that he had learned from his lawyers the U.S. Attorney's Office in Delaware was probing his "tax affairs."

'This is not going away'

Johnson said in an interview Sunday with Fox Business anchor Maria Bartiromo that Hunter Biden and associates Devon Archer, James Gilliar and Rob Walker are not cooperating with the committees' investigation.

He noted that President Trump's children and his associates "voluntary submitted to literally hundreds of hours of interviews and turned over thousands of documents" in Russia-related investigations.

"This is not going away. It's a big mess, and it's going to be a bigger mess in a Biden presidency," Johnson said.

Biden claimed during an election-campaign debate that his son didn't make any money from China, citing 50 former national security officials who insisted the claims about Hunter Biden had the hallmarks of a Russian disinformation campaign. However, the officials admitted they had no evidence to back their claim.

Emails show that Hunter Biden was to receive $10 million annually for three years from CEFC Energy for "introductions alone," presumably meaning to his father and other influential U.S. officials.

In another development Monday, Fox News reported it obtained an email from an attorney indicating Hunter Biden did not report "approximately $400,000" in income he collected from his position on the board of Ukrainian natural gas firm Burisma Holdings when he joined in 2014.