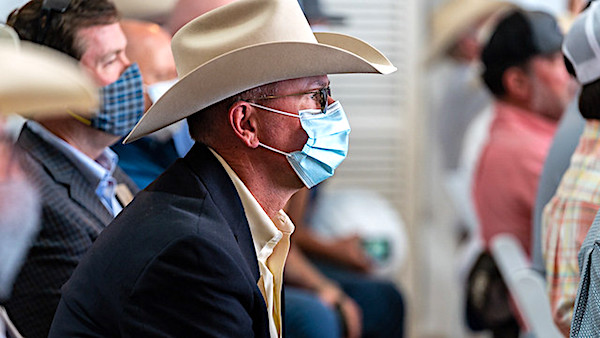 The state of Texas on Tuesday filed a lawsuit directly with the U.S. Supreme Court against Pennsylvania, Georgia, Michigan and Wisconsin, alleging officials in the four states are guilty of "skewing" the results of the 2020 presidential race by refusing to follow their own laws.

"Trust in the integrity of our election processes is sacrosanct and binds our citizenry and the States in this Union together, said Texas Attorney General Ken Paxton. "Georgia, Michigan, Pennsylvania and Wisconsin destroyed that trust and compromised the security and integrity of the 2020 election."

"By ignoring both state and federal law, these states have not only tainted the integrity of their own citizens’ vote, but of Texas and every other state that held lawful elections. Their failure to abide by the rule of law casts a dark shadow of doubt over the outcome of the entire election. We now ask that the Supreme Court step in to correct this egregious error," he said.

"The battleground states flooded their people with unlawful ballot applications and ballots while ignoring statutory requirements as to how they were received, evaluated and counted."

Texas argues that elections for federal office must comport with federal constitutional standards.

"For presidential elections, each state must appoint its electors to the electoral college in a manner that complies with the Constitution. The Electors Clause requirement that only state legislatures may set the rules governing the appointment of electors and elections and cannot be delegated to local officials. The majority of the rushed decisions, made by local officials, were not approved by the state legislatures, thereby circumventing the Constitution."

Texas argues that as a dispute between states, the case qualifies for direct action by the Supreme Court.

The filing asserts the 2020 election "suffered from significant and unconstitutional irregularities in the defendant states."

For example, officials changed election laws that can be changed only by the state legislature. And voters were not treated equally.

Other "flaws" arose from "the unconstitutional relaxation of ballot-integrity protections in those states' election laws," the complaint states.

"All these flaws – even the violations of state election law – violate one or more of the federal requirements for elections (i.e., equal protection, due process, and the Electors Clause) and thus arise under federal law. See Bush v Gore, 531 U.S. 98, 113 (2000) (“significant departure from the legislative scheme for appointing Presidential electors presents a federal constitutional question”) (Rehnquist, C.J., concurring). Plaintiff State respectfully submits that the foregoing types of electoral irregularities exceed the hanging-chad saga of the 2000 election in their degree of departure from both state and federal law. Moreover, these flaws cumulatively preclude knowing who legitimately won the 2020 election and threaten to cloud all future elections. Taken together, these flaws affect an outcome-determinative numbers of popular votes in a group of States that cast outcome-determinative numbers of electoral votes. This Court should grant leave to file the complaint and, ultimately, enjoin the use of unlawful election results without review and ratification by the Defendant States’ legislatures and remand to the Defendant States’ respective legislatures to appoint Presidential Electors in a manner consistent with the Electors Clause.

"Our Country stands at an important crossroads. Either the Constitution matters and must be followed, even when some officials consider it inconvenient or out of date, or it is simply a piece of parchment on display at the National Archives. We ask the Court to choose the former. Lawful elections are at the heart of our constitutional democracy. The public, and indeed the candidates themselves, have a compelling interest in ensuring that the selection of a President — any President — is legitimate. If that trust is lost, the American Experiment will founder. A dark cloud hangs over the 2020 Presidential election. Here is what we know. Using the COVID-19 pandemic as a justification, government officials in the defendant states of Georgia, Michigan, and Wisconsin, and the Commonwealth of Pennsylvania (collectively, “Defendant States”), usurped their legislatures’ authority and unconstitutionally revised their state’s election statutes. They accomplished these statutory revisions through executive fiat or friendly lawsuits, thereby weakening ballot integrity. Finally, these same government officials flooded the Defendant States with millions of ballots to be sent through the mails, or placed in drop boxes, with little or no chain of custody, and, at the same time, weakened the strongest security measures protecting the integrity of the vote – signature verification and witness requirements."

"This court is the only forum that can delay the deadline for the appointment of presidential electors … To safeguard public legitimacy at this unprecedented moment and restore public trust in the president election, this court should extend the December 14, 2020 deadline for Defendant States' certification of presidential electors to allow these investigations to be completed."

There was a "pattern" to the states' actions.

"State officials, sometimes through pending litigation (e.g. settling 'friendly' suits) and sometimes unilaterally by executive fiat, announced new rules for the conduct of the 2020 election that were inconsistent with existing state statutes defining what constitutes a lawful vote."

Votes cast illegally should be disregarded, the complaint argues.

Already, "dozens" of witnesses have testified under oath of Republican poll challengers being kicked out of vote counting, "thousands of the same ballots run multiple times through tabulators; mysterious late night dumps of thousands of ballots … illegally backdating thousands of ballots" and more.

"The probability of former Vice President Biden winning the popular vote in the four defendant states – Georgia, Michigan, Pennsylvania, and Wisconsin – independently given President Trump's early lead in those States as of 3 a.m. on November 4, 2020, is less than one in a quadrillion.

"Put simply, there is substantial reason to doubt the voting results in the defendant states."

"The last-minute bid, which legal experts have already characterized as a longshot, comes alongside dozens of similar attempts by President Donald Trump and his political allies. The majority of those lawsuits have already failed," the Tribune said.

"Join me in praying that if there is fraud, it would be proven — for the good of our nation and all future elections," he said. "Forces of evil are at work, and we know how much is at stake. Pray for God’s will to be done in the outcome of this important election. Please pray — the only hope for our country is God."