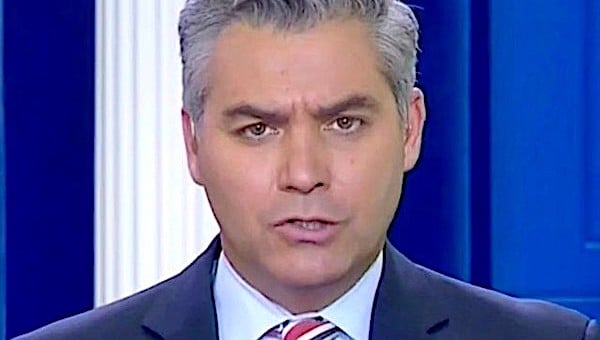 Jim Acosta, the CNN reporter who admitted being neutral as a reporter at President Trump's White House "doesn't really serve us," confessed to "showboating" on the job and is known to have misrepresented the president's comments, says he's going to be easy on the Joe Biden administration.

In an article in the Atlantic, which described him as "picking fights" with the Trump administration for four years, Acosta said, "You can't just go and trash the press and totally lie to the American people and tell them real news is fake news. I couldn't stomach it."

This from a representative of the legacy media that reported nightly with glee for years on the Democrat claims of Trump 2016 campaign collusion with Russia that turned out, through an FBI special counsel investigation, to be "fake news."

And then there was the breathless discussion about Rep. Nancy Pelosi's failed impeach-and-remove campaign against President Trump, based also on what turned out to be "fake news," according to the Senate's acquittal.

Acosta told the Atlantic, "I don't think the press should be trying to whip up the Biden presidency and turn it into must-see TV in a contrived way."

The Atlantic writer commented, "If that sounds like a double standard, Acosta told me it’s not partisan—it’s a matter of professional solidarity. In his view, Trump’s campaign to discredit the press has constituted a 'nonstop national emergency,' one that required a defiant response. 'If being at the White House is not an experience that might merit hazard pay,' he said, 'then perhaps it is going to be approached differently.'"

The comments, according to Fox News, drew criticism that charged Acosta was being "literally delusional."

The Atlantic report noted the Trump administration actually was very good for reporters: "As the White House beat became the biggest story in the world, once-obscure correspondents were recast in the popular imagination as resistance heroes fighting for truth, justice, and the American way. They were showered with book deals, speaking gigs, and hundreds of thousands of Twitter followers."

"It will not be a 24-hour, seven-day-a-week job to fact-check Biden," Dale said.

CNN “fact checker” admitting that he’s pivoting from fact checking Biden to focusing on “online disinformation,” AKA CNN code for Republicans who use the internet + "congressional leaders" which will almost undoubtedly = congressional Republicans in practice.

CNN reporters admitting they won't cover Biden as feverishly as they did Trump!!https://t.co/5Hn07iBtG0 pic.twitter.com/DxcMVWgEnO

A reminder that a lot of the drama during the Trump Era, was due to reporters like Acosta being rude and self-aggrandizing. https://t.co/pg8TAQ37Tk

That Acosta ended up more a player in the news than a reporter was evident when he repeatedly heckled White House officials "with stupid questions," according to a Western Journal report.

It then was in a live report from a Trump rally in Sanford, Florida, just weeks ago, that a masked Acosta "was prattling on about how dire the president's re-election prospects are."

The report said as Acosta was talking, the crowd was chanting "CNN sucks."

"And as this crowd is chanting that there are members of the press here who suck, I should also point out, Wolf – what also sucks? Getting the coronavirus," Acosta said.

Acosta's questions repeatedly were staged to be deliberately provocative, such as "Shouldn't [the president] be telling the truth?"

His campaign against President Trump actually drew a rebuke from Jake Tapper, who is on Acosta's own CNN team. It was after Acosta spread a misleading quote.

And the head of the White House Correspondents' Association at one point rebuked Acosta for his conduct,, explaining Acosta was "playing into the explicit Trump strategy of portraying the press as the opposition party."

He encouraged Acosta to stop giving speeches "from the White House briefing room."

At one point, Acosta tried to take over the briefing, refusing to give up a microphone after he, Acosta, corrected the president about his characterization of thousands of illegal aliens coming into the U.S. as an invasion.

"It was not an invasion," Acosta claimed.

Bob Unruh
Bob Unruh joined WND in 2006 after nearly three decades with the Associated Press, as well as several Upper Midwest newspapers, where he covered everything from legislative battles and sports to tornadoes and homicidal survivalists. He is also a photographer whose scenic work has been used commercially.
Biden's approval craters, down 13 points in just weeks
Report: Biden releasing Haitians into U.S. despite promises to return them home
Retired state Supreme Court justice cites 'evidence' of 2020 election wrongdoing
Democrats eliminate $1 billion Iron Dome missile defense for Israel
Tucker Carlson goes to war with feds over vaccine mandate for military
See more...