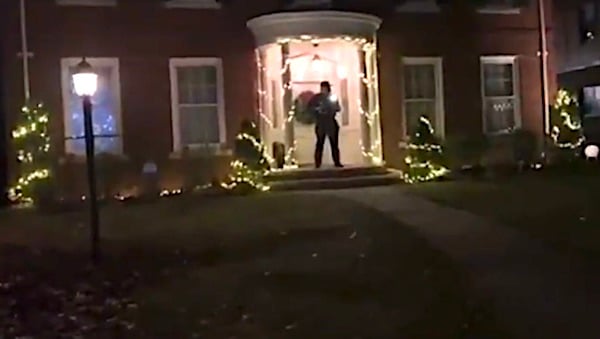 A group of armed demonstrators protested the results of the 2020 election in front of the home of Michigan Secretary of State Jocelyn Benson Saturday.

The group shouted with bullhorns and held signs during the evening protest, where individuals contested the results of the race between President-elect Joe Biden and President Donald Trump, according to video. Genevieve Peters, who took the footage while donning a “Trump 2020” snow hat, called the election “bull****,” before police eventually arrived at the scene, the video showed.

“We are over here in the fricking dead of night, man,” Peters said, according to the Washington Examiner. “We are letting her know that we’re not taking this bull**** election, we are not standing down, we are not giving up. You are not going to take this election from a man that has earned it completely 100% by a freaking landslide. Let me tell you: This ain’t over.”

Benson said she and her son were finishing up Christmas decorations when the crowd arrived.

“As my four-year-old son and I were finishing up decorating the house for Christmas on Saturday night, and he was about to sit down to watch How The Grinch Stole Christmas, dozens of armed individuals stood outside my home shouting obscenities and chanting into bullhorns in the dark of night,” Benson wrote in a statement.

“Through threats of violence, intimidation, and bullying, the armed people outside my home and their political allies seek to undermine and silence the will and voices of every voter in this state, no matter who they voted for. Their goal is to overturn and upend the results of an election are clear and unequivocal, and that 5.5 million Michigan citizens participated in.”

WND News Services
These reports are produced by another news agency, and the editors of WND believe you'll find it of interest.
Biden draws his immigration line at Christians of one kind
How foundations are exercising their influence over elections
Political pundit compares 'woke' mob to enforcers of Mao's Cultural Revolution
Thomas Massie will wear his ticking debt clock to State of the Union
GOP policymakers in 1 state have chance for 'generational political realignment'
See more...