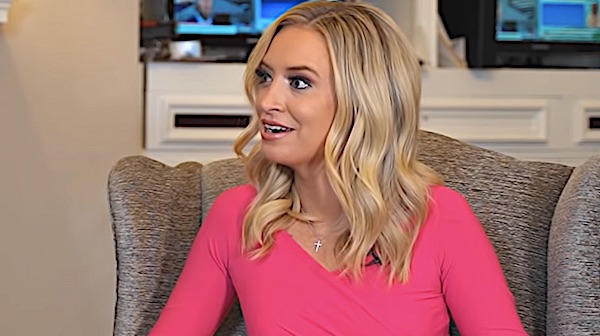 Kayleigh McEnany explained during an exclusive interview with the Daily Caller News Foundation’s Mary Margaret Olohan what prompts her to wear a cross in her high profile position as White House press secretary.

“I always see that you visibly wear a cross,” Olohan said during the Wednesday interview at the White House, noting that some Americans might feel afraid to visibly wear a sign of their faith. “Can you explain why you wear a cross so visibly every day, on national television? What prompts you to do that?”

“Because faith is the reason I’m here,” McEnany responded.

The White House press secretary, who began her political career as a cable news commentator and then worked at the Republican National Committee before joining the Trump campaign, described her journey to the White House as “an unlikely path,” discussing how she interned at the White House during former President George Bush’s administration.

“I’ll never forget watching Dana Perino give her press briefing, never thinking that I would one day be behind that podium,” McEnany said, adding that becoming press secretary was “never my goal.”

“I always wanted to be in politics and media but never really set out for that position. But it all fit together like a woven web because God had a path lined up for me, as he does for each and every person on earth,” McEnany said. “All you have to do is trust him, and follow the path, and pray, and he makes all the dots fit together. The very least I can do is wear the cross, the symbol of the very instrument He died on to save humanity, Jesus Christ.”

McEnany also delved into what it’s like serving in President Donald Trump’s administration as a wife, mother, and conservative woman of faith, her take on the press briefings, how her life has changed since she entered one of the most high profile positions in the United States, what is next for her, and much more.

She reflected on the media’s bias against conservative women, telling Olohan that “no matter what Republican administration it is, Republican women are just treated differently by virtue of their party ideology.”

“It’s unfortunate, but if you are a Republican, male or female, you will be attacked particularly in the Trump administration because the media always is keen to demonstrate their innately liberal bias,” she said.