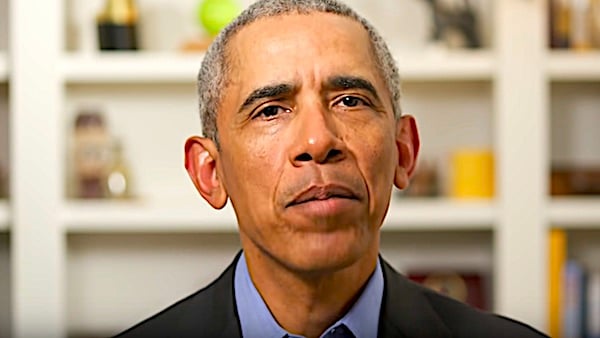 Barack Obama used to be president. He isn't any more. But he still could be impeached, according to the precedent established by Democrats in Congress against Donald Trump.

And he should be, argues PJMedia's Matt Margolis, who listed 10 reasons, including for illegally firing an inspector general and for his administration's spying on the Trump campaign based on a bogus dossier funded by the Hillary campaign.

He cited the Senate Democrats's plan to hold an impeachment trial for Trump over allegations he incited the assault on the Capitol on Jan. 6.

Democrats already have been warned of the precedent they are setting. Sen. John Cornyn, R-Texas, said, for example, that if "it is a good idea to impeach and try former presidents, what about former Democratic presidents when Republicans get the majority in 2022?"

"Think about it and let’s do what is best for the country," he said.

Margolis recalled that Obama illegally fired Gerald Walpin, the inspector general for the Corporation for National and Community Service after Walpin investigated Obama's friend and donor, Kevin Johnson, who had "misused federal grant money for AmeriCorps by funneling it to his personal nonprofit group, paying for political activity, and using it to pay hush money to underage girls he’d sexually abused."

Then there was Obama's "war on cops."

"Seeing as Democrats say that Trump's rhetoric 'incited an insurrection' at the U.S. Capitol as the primary reason for their second bogus impeachment, it's more than fair to say that Obama should be equally held accountable for his rhetoric as president which inspired a war on cops, resulting in a spike in assassinations of police officers nationwide," Margolis wrote.

Among those who were lost in the attacks were five Dallas police officers murdered in an attack in 2016.

And Obama agreed to "illegal treaties" without the consent of the Senate, the Iran Nuclear Deal and Paris Climate Accords, both of which met the requirements for an international treaty. However, Obama refused to submit them to the Senate presumably because he knew they would be shot down. So he simply implemented in apparent violation of the Constitution.

Margolis points out that Obama also "violated at least four federal laws back in 2010, for offering then-congressman Joe Sestak, D-Pa., a job in his administration in exchange for not challenging Arlen Specter for the Democratic nomination for U.S. Senate."

"Bribery is a crime, and Barack Obama committed it," he wrote.

In 2014, 47 of 73 inspectors general wrote to Congress charging "the Obama administration was obstructing investigations by not giving them full access to the information they need."

Such "systemic corruption ... would have been considered an impeachable [offense] for almost any other president," Margolis said.

And Obama spied on the news media, demanding two months of phone records from some Associated Press reporters and editors.

"One consequence of this Obama administration spying was that longtime sources stopped talking to the Associated Press and other news organizations," Margolis noted. Reporter James Rosen of Fox News, even was "threatened with jail time when the Obama Justice Department labeled him a 'co-conspirator' with one of his sources."

"Obama knew Congress was not going to approve of military action in Libya, so instead of going to them for an official declaration of war, he went to the United Nations to get authorization to remove Muammar Gadhafi from power—bypassing Congress's authority," he explained.

The Benghazi attack cover-up was next. Four Americans, including the ambassador, were murdered in Benghazi in an orchestrated terror assault. But Obama's administration, instead "called it a spontaneous demonstration" in order "to hide the fact it was a pre-planned terror attack and that they were grossly unprepared."

The Obama administration, including then-Vice President Joe Biden, "obstructed" an investigation by Congress. Officials then jailed an innocent man, Nakoula Basseley Nakoula, whose film "The Innocence of Muslims" was pulled out of anonymity and blamed for the attack.

The second-most important article of impeachment against Obama should be the IRS targeting scandal, which former IRS official Lois Lerner confirmed actually happened.

"Not only were tea party groups improperly targeted, according to documents obtained by Judicial Watch, but the whole scheme was also orchestrated out of Washington, D.C. There was also evidence of White House involvement. Then-IRS Commissioner Douglas Shulman was at the White House at least 157 times while the IRS was targeting tea party groups," Margolis explained.

"The spying on President Trump’s campaign alone [that is] is chock full of abuses of power and illegal activity." "The Obama administration spied on the Trump campaign based on a bogus dossier funded by the Hillary campaign. The Obama administration used the dossier, that they knew was Russian disinformation ginned up to distract from Hillary’s email scandal, to obtain a FISA warrant even though they never had any empirical evidence of collusion. Further, evidence that Russia actually preferred Hillary over Trump was allegedly suppressed by Obama’s CIA Director John Brennan. The Obamagate scandal runs deep, wide, and dirty."

And Obama "was aware that his administration was spying on Trump’s incoming National Security Adviser Michael Flynn, whose communications with then-Russian Ambassador Sergey Kislyak were illegally leaked to the media to bolster the bogus claims of Russian collusion between Trump and Russia."

"Obama’s direct knowledge of the details of Flynn’s wiretapped calls even shocked his then-Deputy Attorney General Sally Yates. Obama had fired Flynn as head of the Defense Intelligence Agency in 2014 in order to protect Obama’s nuclear deal with Iran. Evidence that the Obama administration intended to catch Flynn in a perjury trap or get him fired was also exposed, prompting Trump’s Department of Justice to drop the case against Flynn. And Obama’s direct knowledge of the attempt to railroad Flynn proved that the effort to undermine Trump went all the way to the top."