Two days before President Donald Trump exited the White House, one of his administration's most important documents was released: "The 1776 Final Report." It is a 40-page treatise about America's founders' views and history compiled by a team of distinguished historians and scholars. They did so with the mission to demonstrate and counter the left's war on U.S. history and goal to reinterpret the founders' and framers' original intent and work in light of the progressive agenda and education. 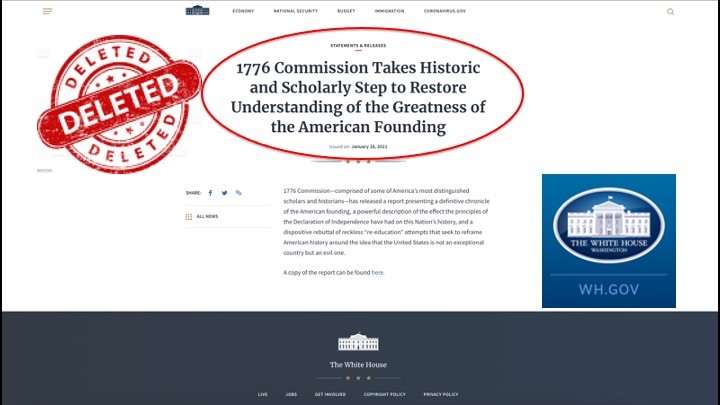 On Mon., Jan. 18 (MLK Day), the above was how the White House website showcased the 1776 Commission and its Final Report (red deleted stamp and oval highlight mine).

Mike Gonzalez – a senior fellow at the Heritage's Allison Center for Foreign Policy, the Angeles T. Arredondo E Pluribus Unum fellow and one of the members of the 1776 Commission – questioned Biden's urgency and motive in his column, "Biden's Disbanding of 1776 Commission Shows Left's War on U.S. History": "Is the baying from the woke left so furious that dissolving a commission named after our nation's founding, and deleting a report calling for teaching objective history, makes the top of the list? The symbolism alone should give pause."

Before the ink dried on Biden's executive order and Americans could even read the 1776 Report, it was deleted from the White House website, and the mainstream media were mobilized to brand the scholarship of the 1776 Commission as racist propaganda. Did Biden, his administration or media outlets have time to read and critique the report or check the credentials of the scholars who compiled it? 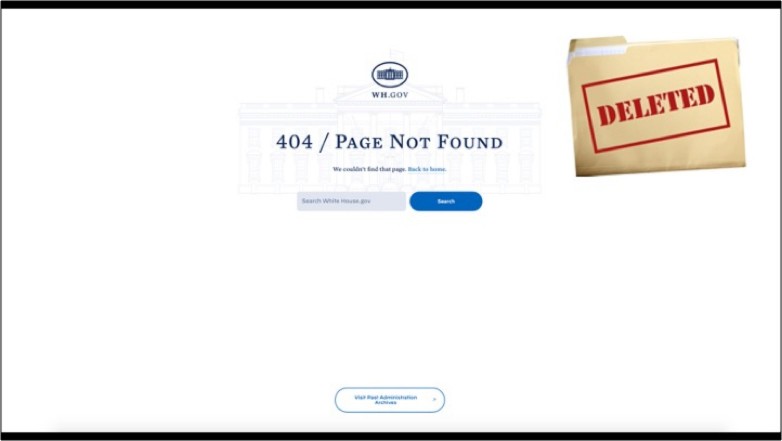 By Thursday, Jan. 21, on President Biden's first full day in office, the above was how the White House website displayed the same URL page that formerly took a searcher to the 1776 Commission and Report ("deleted" image mine).

Here are a few resulting mainstream headlines from this last week:

MSNBC: "The Trump administration's thinly-veiled rebuke of 'The 1619 Project' is a sloppy, racist mess"

The worst part about the new administration's snuffing out of this team of distinguished historians and scholars that comprised the 1776 Commission was the ways they were assailed, demeaned, denigrated and demonized as radicals, racists and inept historians. But were they? You decide for yourselves as I have listed their credentials below. I spared no column space so you can skim or examine them in depth. In addition to most being prolific published authors, they are well-respected scholars, esteemed professors and historians, contrary to most media outlets' reporting.

Dr. Larry P. Arnn, Ph.D., 12th president of Hillsdale College as well as the professor of history and politics. He also studied at Worcester College, Oxford University, where he served as director of research for Sir Martin Gilbert, the official biographer of Winston Churchill. Dr. Arnn is on the board of directors of The Heritage Foundation, the Henry Salvatori Center of Claremont McKenna College, the Philadelphia Society, the Intercollegiate Studies Institute, and the Claremont Institute.

Dr. Matthew Spalding, Ph.D., Professor in Constitutional Government at Hillsdale College and the Dean of the Van Andel Graduate School of Government at Hillsdale College's Washington, D.C., campus. As Vice President for Washington Operations, he also oversees the Allan P. Kirby, Jr. Center for Constitutional Studies and Citizenship and the academic and educational programs of Hillsdale in the nation's capital.

Dr. Jerry Davis, Ph.D., President of College of the Ozarks, who, with four degrees to his name, has had a prestigious 44-year career as a college president (one of the longest in higher education). Davis has also served two terms as president of the American Association of Presidents of Independent Colleges and Universities, served as a trustee or advisor of the Marine Military Academy and has been a featured speaker at the United States Air Force Academy and the United States Military Academy at West Point. U.S. News & World Report has ranked College of the Ozarks a top college in the Midwest since 1989.

Dr. Phil Bryant, the eight-year governor of Mississippi (2012-2020), who earned a Bachelor's degree in criminal justice from the University of Southern Mississippi, a Master's degree and Honorary Doctorate in political science from Mississippi College, where he also served as an adjunct professor of Mississippi political history, both before and during his first term as governor.

Dr. Michael Farris, received his B.A. in political science from Western Washington University, an LL.M degree in public international law from the University of London, and a Juris Doctorate from the Gonzaga University School of Law. Farris is the founder of the Patrick Henry College as well as CEO of Alliance Defending Freedom.

Gay Hart Gaines received the Lifetime Achievement Award in 2015, where the Palm Beach Daily News reported: For 13 years, Gaines served the George Washington's Mount Vernon Ladies' Association as vice regent for Florida. Under her leadership, Mount Vernon completed building an orientation center, education center and museum as well as a George Washington Library, which opened in September 2013. As a Trustee for the Society of the Four Arts with 22 videos in the C-SPAN Video Library, Gaines has extensively hosted educational forums on America's founders going back to 1993.

Mike Gonzalez is a senior fellow in Heritage's Allison Center for Foreign Policy and the Angeles T. Arredondo E Pluribus Unum fellow. Fluent in four languages, Gonzales has an extensive history in editorial investigation and journalism domestically and abroad.

Peter N. Kirsanow received his B.A. from Cornell University and his J.D. with honors from Cleveland State University, where he served as articles editor of the Cleveland State Law Review, before taking the post as Commissioner on the U.S. Commission on Civil Rights. Kirsanow frequently testifies before and advises members of the U.S. Congress on various civil rights and labor related issues, appearing before the Senate Judiciary Committee regarding the nominations of Chief Justice John G. Roberts and Justice Samuel Alito to the United States Supreme Court.

Bob McEwen is the senior adviser with the nationally recognized law firm of Greenebaum, Doll & McDonald. McEwen has served in myriad of bilateral government roles and support domestically and abroad going back four decades. Mr. McEwen was elected by his colleagues to the two most coveted positions in the U. S. Congress; the Select Committee on Intelligence which oversees all of our nation's secrets, and the powerful House Committee on Rules which has jurisdiction over all legislation in the Congress.

Julie Strauss Levin is an attorney with extensive experience. Julie provides federal intellectual property and related counseling. In 2019, she was appointed to the U.S. Commission for the Preservation of America's Heritage Abroad.

Does that above group really seem like a group of scholars who would haphazardly or biasedly approach the history of America's founders? Discarding their work or demonizing these great scholars is a clear bias of a secular progressive leftist agenda.

The 1776 Report was about much more than racial perspectives. It is about America's founders views on constitutional interpretation history, the role of the family, the respect for laws, identity politics, progressivism, governmental limitations and even the role of religion and faith.

Committee member Dr. Carol Swain said that secular progressives even avoid America's true religious history and influence to our detriment: "There's no way you can look at the constitutions of the 13 colonies … up until parts of the 20th century and say that our nation was not deeply influenced by religion, the Judeo-Christian religion in particular, and that is a part of who we are, part of history, we shouldn't try to erase."

My New York Times bestseller "Black Belt Patriotism" is all about reawakening the American dream by returning to the founders' vision and understanding for our republic. I've read the 1776 Report, and I can tell you it is spot on in its history and perspectives. We shouldn't be covering up America's founders' history and views but elevating and learning from them. Whether we are Republican, Democrat or Independent, what our founders established is the bedrock for all we are and do as Americans, including our cherished Bill of Rights and liberties.

On Dec. 27, 1820, Thomas Jefferson wrote William Roscoe about his vision for the University of Virginia (chartered in 1819), "This institution will be based on the illimitable freedom of the human mind. For here we are not afraid to follow the truth wherever it may lead, nor to tolerate any error as long as reason is left free to combat it."

But what should happen 200 years later when our public universities avoid the testing of truths? Or suppress alternate opinions because they are unpopular or politically incorrect? Or no longer tolerate opinions now considered errors by the progressive elite?

What happens when sociopolitical agendas or scientific paradigms dominate university views to the exclusion of a minority even being mentioned or tested? When higher centers of learning fail to be places where all ideas are examined from a variety of reasoned perspectives?

What happens when the political and public educational pendulum swings from concern for the tyranny of sectarianism in Jefferson's day to secularism in ours?

I'll say it again: We shouldn't fear anyone's point of view and so test its truthfulness for ourselves, especially when sound and prestigious scholars are officially commissioned by the White House to present the history of America's founders for we the people. It is appalling that a new administration covered up their work and whitewashed the White House website of their contributions on its very first day in office by executive order. Is their agenda not clear in doing so from the outset?

Bottom line, in response to Biden's disposal of the 1776 Committee and its report, member Dr. Jerry Davis told "Fox & Friends": "What we see here is just another battle in the war against American heritage. Why would anyone have a problem with the commission, whose sole goal is to better inform people about the heritage of the country?"

Dr. Davis concluded with the charge: "Read the report for yourself. Don't listen to these know-it-alls in the Ivy League or in the media that want to tell us how to live and how to think."

I agree. Don't take their or my word for it. Read it for yourself, and then share it and my column with the credentials of the 1776 Commission members with everyone you know. Download the 1776 Report soon before it's gone forever, and distribute it especially to every member in your family and in your circle of friends, for the sake of our republic's history and our posterity.

You can still momentarily access the full 1776 Commission Final Report in this archive dungeon. But because I don't expect it to stay there long either, you can also find it by visiting the College of the Ozarks website here: https://www.cofo.edu/1776-commission.