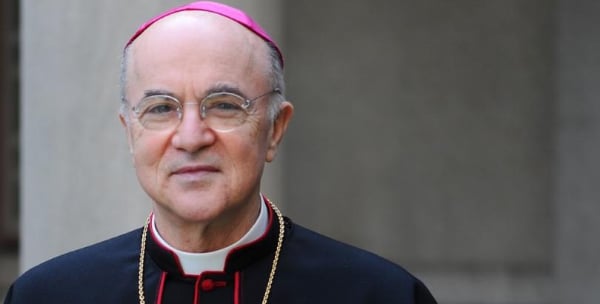 Roman Catholic Archbishop Carlo Maria Viganò, a former papal ambassador to the United States, declared in an interview published Monday that practicing Catholic Joe Biden's ties to China and his globalist policies would make him an "irreparable disaster" as president.

"It would be an irreparable disaster if Joe Biden, who is heavily suspected of being complicit with the Chinese dictatorship, would be designated as president of the United States," he said in an interview with Steve Bannon, the host of "War Room" and a former chief White House adviser.

WND reported last month a Beijing university professor cited the Biden family's Chinese business deals as he explained in a Nov. 28 lecture why a Biden administration will restore the communist regime's influence on its "old friends" on Wall Street and inside the Beltway after it was throttled by President Trump.

Late Monday, Vigano retweeted a tweet in which Trump said he was heading to Georgia for a final rally before the two runoff elections Tuesday that will decide control of the U.S. Senate.

"To be an instrument of Divine Providence is a great responsibility," Vigano wrote to Trump, "for which you will certainly receive all the graces of state that you need, since they are being fervently implored for you by the many people who support you with their prayers."

In October Vigano wrote an open letter to Trump warning the president is "the final garrison" against the "Great Reset," a plan by the World Economic Forum to use the coronavirus pandemic to advance globalism.

Vigano wrote a letter to Trump in May warning that the COVID-19 pandemic was being used to usher in a "world government" that would strip people of their freedoms. In a letter in June, he encouraged Trump in his fight against the "deep state."

Last month, Cardinal Raymond Burke of St. Louis called the "Great Reset" an attempt to manipulate "citizens and nations through ignorance and fear" as Marxist materialism takes hold in the United States.

In the interview with Bannon, Vigano praised Trump for pressuring China and raising awareness in the international community of the communist regime's "systemic violation" of religious and human rights.

He pointed to Biden's "numerous ties to China, the deep state, and the advocates of globalist ideology."

"I think of his intention to condemn us all to wear masks, as he has candidly admitted. I think of the fact that, incontestably, he is only a puppet in the hands of the elite, who are ready to remove him as soon they decide to replace him with Kamala Harris," Vigano said.

The archbishop noted Pope Francis' support for Biden and "hostility" to Trump.

"It is clear that [the pope] considers Trump as his principal adversary, the obstacle that needs to be removed so that the Great Reset can be put in motion," Vigano said.

"Thus on the one hand we have the Trump administration and the traditional values that it holds in common with those of Catholics; on the other hand, we have the deep state of the self-styled Catholic Joe Biden, who is subservient to the globalist ideology and its perverse, anti-human, antichristic, infernal agenda," he said.

Vigano was asked what advice he would give to "recalcitrant politicians about what is at stake for our nation and the world" if they don't contest the 2020 election.

"The truth can be denied by the majority for a certain amount of time, or by some people forever, but it can never be hidden from everyone forever," he replied. "This is the lesson of history, which has inexorably revealed the great crimes of the past and those who perpetrated them."

He urged politicians "to become champions of the truth, to defend it as an indispensable treasure which alone can guarantee the credibility of institutions and the authority of the people’s representatives, in accord with the mandate they have received, the oath they have sworn to serve their country, and their moral responsibility before God."

"Each one of us has a role that Providence has entrusted to us, and which it would be culpable to shrink from," he said. "If the United States misses this opportunity, now, it will be wiped out from history."

Vigano noted that years ago, people who spoke of the New World Order were called conspiracy theorists.

"Today, all of the world’s leaders, including [the pope], speak with impunity about the New World Order, describing it exactly in the terms that were identified by the so-called conspiracy theorists," he said. "It is enough to read the globalists’ declarations to understand that the conspiracy exists and that they pride themselves on being its architects, to the point of admitting the need for a pandemic in order to reach their objectives of social engineering."