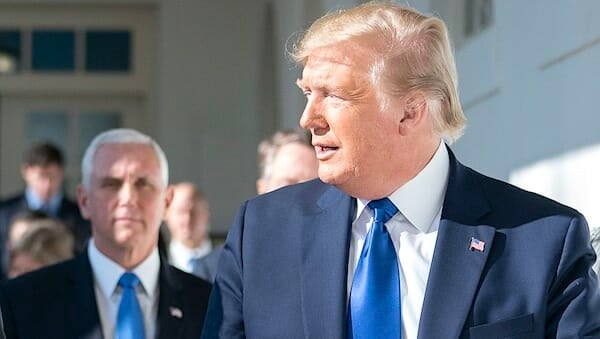 President Trump's constitutional lawyer John Eastman said late Wednesday afternoon that Vice President Mike Pence misrepresented what he was being asked to do when he presided over the certification of the Electoral College votes.

"I think he's exaggerating what the request was," said Eastman in an interview with Steve Bannon on "War Room."

The lawyer said Pence was not asked to be the only one to decide the election.

The attorney noted Pence began the three-page letter he issued just before the start of the joint session of Congress acknowledging there were numerous instances of officials in battleground states setting aside state election laws.

"That means we have several slates of electors that were illegally given," Eastman explained.

"And what [Pence] had been asked to do is recognize that they had been illegally given and send it back to the state legislatures and allow them -- and they're the proper constitutional authority in this instance -- to allow them to assess the situation in their own states and decide whether they can ratify the existing slate of electors or whether they were fraudulently given and should be altered," Eastman said.

Pence said in his letter that it was "my considered judgment that my oath to support and defend the Constitution constrains me from claiming unilateral authority to determine which electoral votes should be counted and which should not."

The issue, Eastman said, is whether or not Pence should allow the certification of electoral votes "that we know were illegally cast, as he acknowledged at the front end of the letter."

"And I'm sorry, a little petty statute against the constitutional obligation not to allow our Constitution to be shredded by allowing illegally cast electoral votes to decide the election? That should be an easy call," the attorney said.

His reference was to the Electoral Count Act of 1877, a law deemed unconstitutional by many scholars that minimizes the role of Congress in certifying the vote.

Bannon noted that lawmakers in Georgia, Pennsylvania and Arizona have asked for time to investigate after having seen more evidence over the weekend.

Eastman said governors have refused to call special sessions and courts have dismissed cases on procedural grounds, refusing to look at the merits.

"We need to allow for this investigative process to play out so people on both sides can have some sense that what happened here and the results here were actually fairly given rather than illegally given," he said.

"The undermining of democracy occurs when you change the rules of the game in the middle of the election -- or in the case of Pennsylvania, continue to change them, even after the election -- in order to let your guy win."