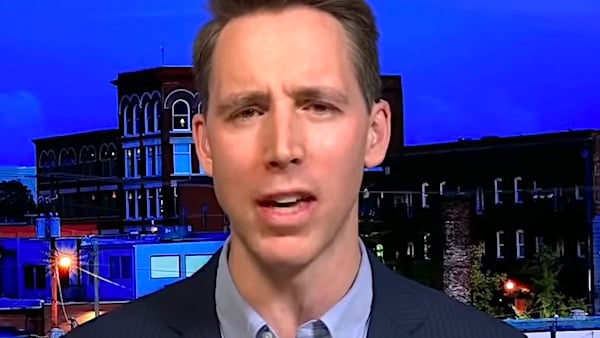 Citing his objection to electoral votes during the joint session on Wednesday, Simon & Schuster has canceled the publication of Republican Sen. Josh Hawley's upcoming book.

The New York Times reported the publisher, one of the "Big Five," explained it "cannot support Senator Hawley after his role in what became a dangerous threat to our democracy and freedom."

The reference was to the breach of the Capitol building by protesters that forced lawmakers to adjourn the certification in Congress and seek refuge. The joint session of Congress resumed Wednesday evening, and Joe Biden was officially certified as the 46th president.

Hawley was the first to announce he would object to slates of Electoral College votes in states where there was evidence of irregularities and fraud that would be sufficient to change the outcome of the election. He explained on Twitter: "Somebody has to stand up. 74 million Americans are not going to be told their voices don't matter."

The Missouri senator engaged in a constitutional process -- raising an objection to Electoral College votes -- that has been employed by Democrats against Republican presidential winners every time since the 2000 election.

Hawley on Thursday afternoon issued a "statement on the woke mob" at Simon & Schuster, telling the publisher, "We'll see you in court."

"This could not be more Orwellian," he wrote on Twitter. "Simon & Schuster canceling my contract because I was representing my constituents, leading a debate on the Senate floor on voter integrity, which they have not decided to redefine as sedition.

"Let me be clear, this is not just a contract dispute," he continued. "It's a direct assault on the First Amendment."

Apparently, he said, only "approve speech can now be published."

"This is the Left looking to cancel everyone they don't approve of," he said. "I will fight this cancel culture with everything I have. We'll see you in court."

Benjamin Weingarten, a Newsweek columnist and senior fellow at the London Center for Policy Research, commented that the publisher's action "will become the norm in civil society, and it will tear the country apart."

The lawmaker said it's "so dishonest for anyone to try to define Hawley's purpose yesterday as being about 'insurrection,' 'treason' or 'sedition.'"

Hawley's book, "The Tyranny of Big Tech," was scheduled to be published in June.

The senator was the target Monday night of Antifa operatives who threatened his wife and newborn daughter at their home. He said via Twitter that the attack took place at his home in suburban Washington, D.C., while he was in his home state.

"Tonight while I was in Missouri, Antifa scumbags came to our place in DC and threatened my wife and newborn daughter, who can't travel," Hawley wrote. "They screamed threats, vandalized, and tried to pound open our door. Let me be clear: My family & I will not be intimidated by left-wing violence."

Publisher rebuked
The Times noted several writers and at least one Simon & Schuster author rebuked the publisher for its plan to publish Hawley's book.

The publisher said in a statement that it did "not come to this decision lightly."

"As a publisher it will always be our mission to amplify a variety of voices and viewpoints: At the same time we take seriously our larger public responsibility as citizens, and cannot support Senator Hawley after his role in what became a dangerous threat."

The Times' Liz Harris wrote that the "cancellation signaled the pitfalls that mainstream publishers face as they attempt to straddle the partisan divide in a hyper-polarized and volatile political environment."

She said "some publishing professionals wondered if the violence at the Capitol would make it untenable for them to work with conservative authors who have questioned the legitimacy of the election or taken other incendiary positions."

Simon & Schuster has published a number of anti-Trump books, including "Too Much and Never Enough," by Mary L. Trump, a niece of the president; "Rage," by Bob Woodward; and "The Room Where It Happened," by John Bolton, a former national security adviser in the Trump administration.