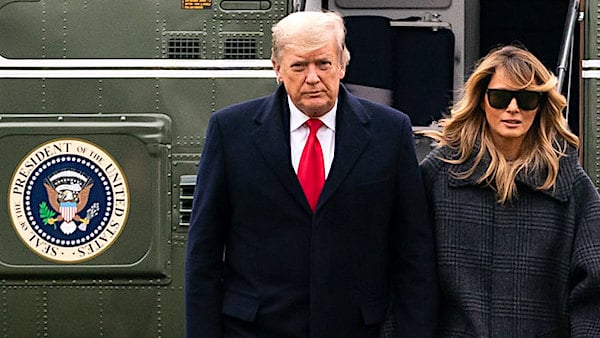 President Trump announced Friday morning he will not attend the inauguration of Joe Biden.

"To all of those who have asked, I will not be going to the Inauguration on January 20th," he wrote on Friday.

In a video message posted Thursday evening on Twitter, Trump vowed to assist in an orderly transition to a Biden administration, condemned "the heinous attack" on the U.S. Capitol on Wednesday and promised his supporters that "our incredible journey is only just beginning."

Just prior to announcing he won't attend the inauguration, he tweeted Friday that the 75 million who voted for him "will have a GIANT VOICE long into the future. They will not be disrespected or treated unfairly in any way, shape or form!!!"

Trump will be the fourth president to not attend his successor's inauguration and the first since 1869. Presidents John Adams, John Quincy Adams and Andrew Johnson were the others.

Vice President Mike Pence "likely" will attend the inauguration, according to three sources close to the vice president who spoke to Politico.

The sources said Pence's decision was made easier after Trump publicly insisted the vice president had the constitutional authority to send slates of electors back to the states to address evidence of vote fraud.

Pence was incensed by Trump's remarks, a source close to Pence told Politico.

"It was a much more difficult decision days ago, but less difficult now," the source said.

'Tempers must be cooled and calm restored'

On Thursday night, amid Democrat calls for invoking the 25th Amendment and impeachment, Trump said he was "outraged by the violence and lawlessness and mayhem" at the Capitol on Wednesday.

He noted he deployed the National Guard and law enforcement to "secure the building and expel the intruders."

"America is and must always be a nation of law and order," he said.

Trump said the infiltrators have "defiled the seat of American democracy." To those who engaged in acts of violence and destruction, he said, "You do not represent our country."

"To those who broke the law, you will pay," he vowed.

Emotions are high after the election, the president said, but "tempers must be cooled and calm restored."

Shortly after Biden's election was certified in the early morning hours Thursday, a White House spokesman issued a statement from Trump saying, "Even though I totally disagree with the outcome of the election, and the facts bear me out, nevertheless there will be an orderly transition on January 20th."

On Thursday afternoon, White House Press Secretary Kayleigh McEnany said in a brief news conference in which she took questions that the "violence we saw yesterday at our nation's capital was appalling, reprehensible and antithetical to the American way."

"The president and this administration condemn it in the strongest possible terms," she said. "Those who are working in this building are working to ensure an orderly transition of power. Now it is time for America to unite. To come together. To reject the violence that we have seen. We are one American people, under God."

In his video statement Thursday night, Trump said his campaign "pursued every legal avenue to contest the election results."

"My only goal was to ensure the integrity of the vote," he said.

The president called for reform of election laws to "verify the identity and eligibility of all voters and to ensure faith and conference in all future elections."

Trump said that with the cerification of Biden's election, his "focus now turns to ensuring a smooth and orderly and seemless transition of power."

"This moment calls for healing and reconciliation," he said.

"To the citizens of our country, serving as your president has been the honor of my lifetime," he said.

"And to all of my wonderful supporters," Trump concluded, "I know you are disappointed, but I also want you to know that our incredible journey is only just beginning."