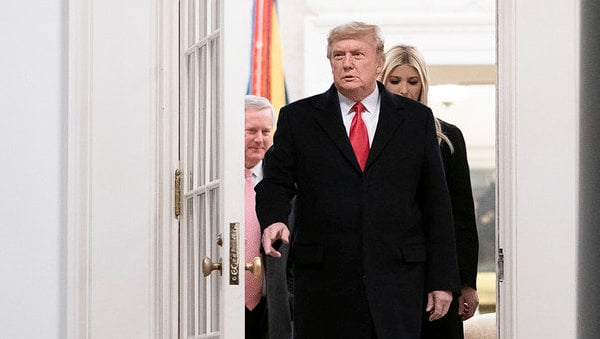 President Donald J. Trump walks from the Oval Office to board Marine One on the South Lawn of the White House Tuesday, Jan. 4, 2021, en route to Joint Base Andrews, Maryland, to begin his trip to Georgia. (Official White House photo by Joyce N. Boghosian)

House Speaker Nancy Pelosi has opened a "huge door" for the president to present evidence of election fraud if she goes ahead with impeachment, warned White House trade adviser Peter Navarro, the author of two reports on the subject.

"If she's going to prosecute the case on the basis of false statements about the illegality of the election, bring it on," he said in an interview with Steven Bannon's "War Room," "because we've got the receipts."

Navarro was referring to the statement in the article of impeachment formally issued Monday charging Trump "reiterated false claims that 'we won this election, and we won it by a landslide.'"

The White House adviser said he will soon issue the third volume of his report on election fraud.

"The president is just itching to defend himself on this issue," he said.

Navarro said the Democrats "always overplay their hand, and this is going to bite 'em, you know where."

In December, Navarro released a report providing evidence of what he described as election "theft by a thousand cuts," titled "The Immaculate Deception." He identified six major dimensions of alleged election irregularities across six states: "outright voter fraud, ballot mishandling, contestable process fouls, Equal Protection Clause violations, voting machine irregularities and significant statistical anomalies." Last week, he released a sequel, "The Art of the Steal," that documented what he described as a coordinated strategy.

On Monday, after House Republicans blocked a measure calling on Vice President Mike Pence to invoke the 25th Amendment to remove President Trump from office, Democrats formally introduced an article of impeachment against the president, charging him with "incitement of insurrection" in connection with the massive breach of the U.S. Capitol.

House Speaker Nancy Pelosi, D-Calif., insists that while there are only nine days remaining in Trump's term, the president is "unhinged" and must be removed as soon as possible.

However, the Senate will not be in session until Jan. 20 at 1 p.m., which is one hour after Trump leaves office. Constitutional scholars argue the Constitution makes no provision for impeaching a former president.