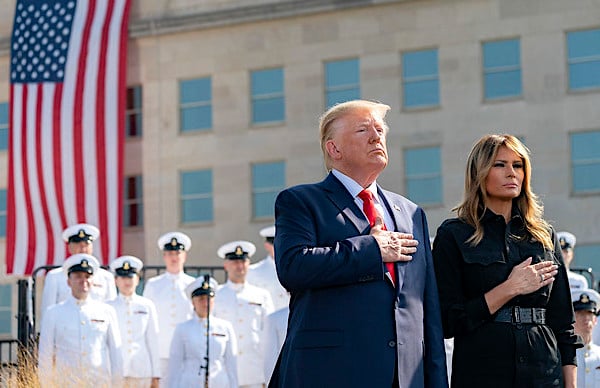 Critics of the report released Monday by President Trump's 1776 Commission, which seeks to restore education on America and its founding, charge it is racist and "excuses" the nation's history of slavery.

A USA Today story by Matthew Brown called the report "a document that excuses America's history of slavery, derides the legacy of the civil rights movement and equates progressivism with totalitarianism."

In its introduction, the report argues that while the country "has its imperfections, just like any other country, in the annals of history the United States has achieved the greatest degree of personal freedom, security, and prosperity for the greatest proportion of its own people and for others around the world."

The Times, and the Wikipedia entry on the report, claimed the commission had no professional historians.

The paper apparently was unfamiliar with, among others, members Victor Davis Hanson, Charles Kessler and the commission's chairman, Larry Arnn, the president of Hillsdale College.

Arnn studied international history at the London School of Economics and modern history at Oxford University in England. While in England, he worked as director of research for the official biographer of Winston Churchill.

Kessler, a graduate of Harvard and a professor at Claremont McKenna College and Claremont Graduate University, is known for his scholarship on Abraham Lincoln.

Hanson is a professor emeritus of classics at California State University, Fresno, and a senior fellow in classics and military history at Stanford University's Hoover Institution.

Other members were Carol Swain, a retired professor of political science and law at Vanderbilt University; and Matthew Spalding, a professor at Hillsdale College who has written a number of books on George Washington and the Founders.

The report argues that among "the virtues to be cultivated in the American republic, the founders knew that a free people must have a knowledge of the principles and practices of liberty, and an appreciation of their origins and challenges."

"An authentic civics education will help rebuild our common bonds, our mutual friendship, and our civic devotion. But we cannot love what we do not know," the report says. "This is why civics education, education relating to the citizen, must begin with knowledge, which is, as George Washington reminds us, “the surest basis of public happiness."

The White House described the report in a statement as "presenting a definitive chronicle of the American founding, a powerful description of the effect the principles of the Declaration of Independence have had on this Nation’s history, and a dispositive rebuttal of reckless ‘re-education’ attempts that seek to reframe American history around the idea that the United States is not an exceptional country but an evil one.”

The White House clearly had in mind the attempt at "re-education" published by the New York Times, "The 1619 Project," authored by Nikole Hannah-Jones.

Last October, Arnn and Hanson were among the professors, academics and historians who signed a letter urging the Pulitzer Prize Board to rescind its award to Hannah-Jones for her project.

The Pulitzer board called her work "a sweeping, deeply reported and personal essay for the ground-breaking 1619 Project, which seeks to place the enslavement of Africans at the center of America's story."

Hannah-Jones asserts that 1619, "when some 20 Africans arrived at Jamestown," should be recognized as the year of the nation's founding, not 1776.

But Hannah-Jones has dismissed the criticism, and the Times has stonewalled, the letter says.