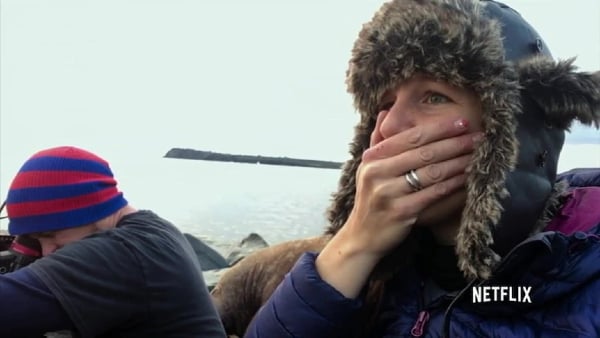 One of the most emotionally powerful drivers behind the World Economic Forum's claim that the world faces a "climate emergency" turns out to be something quite different than advertised.

At WEF's prestigious gathering of global elites in Davos, Switzerland, two years ago, a clip from the Netflix documentary series "Our Planet" was premiered by the narrator, Sir David Attenborough. It featured the heartbreaking scene of walruses falling off a cliff in Siberia to their deaths "because of climate change," bringing many of the billionaires and political leaders to tears.

Attenborough said global warming caused by mankind had melted the walruses' natural hunting grounds. However, polar bear expert Susan Crockford investigated and discovered there was a natural reason for the walruses' behavior. It had nothing to do with a loss of summer sea ice, which has fluctuated over many years.

Crockford learned that the Russian scientific adviser to the film, Anatoli Kochnev, had written a report in 2002 on walrus deaths at two regularly used beach haulouts on Wrangel Island from 1989-1996. At that time the walrus population numbers were much lower than today and the extent of the summer sea ice was much greater.

Kochnev, Crockford wrote, "concluded that stampedes initiated by polar bears were responsible for most of the walruses found trampled to death."

"This means Kochnev knew that polar bears nearby were a huge risk factor for walrus stampedes over the cliff but went along with the official 'Our Planet' narrative that no polar bears were involved and only lack of sea ice and poor eyesight were to blame for the carnage presented in the Netflix film," she wrote.

In fact, as Crockford demonstrates in a video, a Russian videographer released independent footage of the event in the Netflix documentary. His video shows a polar bear above the panicking walruses on the cliff.

Attenborough later acknowledged in a BBC documentary that the walrus deaths were due to hungry polar bears.

See another video by Susan Crockford presenting an overview of the controversy:

Last week, attendees of WEF's "Davos Agenda" virtual meeting were reminded that addressing climate change requires a change in the economic "system" of nations around the globe rather than "mere reform."

WEF founder Klaus Schwab last year called for a "Great Reset of capitalism" in response to the coronavirus pandemic.

The "Davos Agenda" conference opened last week with a speech by China's president and general secretary of the Communist Party, Xi Jinping.

Crockford is known for her research showing polar bear populations are stable and even thriving, contrary to the claims of climate activists that their numbers are plummeting due to shrinking Arctic sea ice.

It's now been acknowledged by the World Wide Fund for Nature and other environmental groups that featuring the plight of the polar bear in their climate-change message has become "problematic."

In 2019, Crockford was fired without explanation by the University of Victoria in Canada after 15 years as an adjunct professor while her profile grew as a speaker and author due to her polar bear research and expertise in mammal bone identification.

Crockford, who earned a Ph.D. in biology and anthropology in 2004, described her expulsion as "an academic hanging without a trial, conducted behind closed doors."

Her popular Polar Bear Science website was denounced as a "denier blog" in a 2017 study in the journal BioScience by 14 academics, including Penn State climatologist Michael E. Mann.

Mann is known for producing the "hockey stick graph" popularized by Al Gore claiming world temperatures were flat or slightly declining for more than 900 years before rising sharply in the 20th century era of human carbon dioxide emissions. Critics have pointed out, however, that Mann's graph doesn't show the Medieval Warm period between about 1000 and 1300 in which temperatures were warmer than the present.