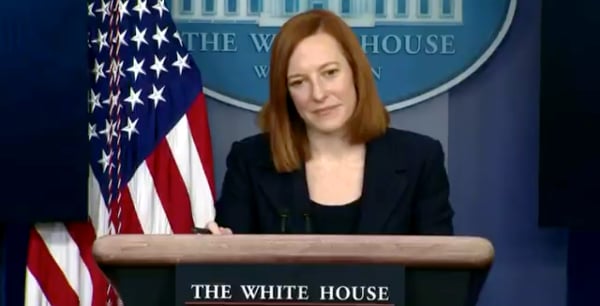 For the third day in a row, the White House refused to respond to the growing GameStop controversy on Wall Street amid further market volatility.

White House Press Secretary Jen Psaki was pressed by a reporter on why the White House was not weighing in on a "big story," even as President Biden met with his economic team.

"I know it's a big story," Psaki said, "but our focus and our big story is getting the American people back to work," she said.

"I know it’s a big story, but our focus and our big story is getting the American people back to work," Psaki answered. https://t.co/5QHatDJGqi pic.twitter.com/HGAlCi4tgZ

Psaki directed reporters to statements by the Securities and Exchange Commission.

"They are closely monitoring this situation but it is under their purview at this point of time," she said.

Psaki would not say whether the topic would come up when Biden met later Friday with Treasury Secretary Janet Yellen. The former Fed chairwoman notably received $810,000 in speaking fees from the hedge fund Citadel, which bailed out one of the primary losers in the Gamestop chaos.

The controversy began when members of a Reddit message group with little trading experience called WallStreetBets joined forces to buy stock in GameStop and other struggling companies. The middle-class investors said their aim was not only to make some money amid the coronavirus lockdown but to punish hedge funds accustomed to profiting from the short sale of stocks.

A short sale is a transaction in which an investor borrows securities and then sells them in anticipation of a price decline. If the price goes down, the seller then can buy the stock back at a lower price and return it to the owner, thus making a profit. But if the price goes up -- as did GameStop stock -- the short-seller suffers a loss.

In the case of GameStop and others, including AMC, it was a massive loss for hedge funds. Citadel and Point72 poured nearly $3 billion into Melvin Capital, one of the biggest hedge fund losers. On Wednesday, GameStop stock surged from below $20 to close at about $350. On Thursday, it swung during trading between $112 and $483, closing a $193.60. But in after hours trading it was up more than 60%, surpassing $300 per share.

Robinhood and other retail brokerages restricted trade on GameStop and others, prompting more market volatility and protest from some users and Congress members charging small investors were being treated unfairly.

It's an issue on which even the likes of far-left "Squad" member Rep. Alexandria Ocasio-Cortez, D-N.Y., and Sen. Ted Cruz, R-Texas, agreed.

Sen. Elizabeth Warren, D-Mass., wrote Wednesday on Twitter: "For years, the same hedge funds, private equity firms, and wealthy investors dismayed by the GameStop trades have treated the stock market like their own personal casino while everyone else pays the price."

She said it's "long past time for the SEC and other financial regulators to wake up and do their jobs – and with a new administration and Democrats running Congress, I intend to make sure they do."

What will Biden do to protect the average investor?

During Thursday's White House briefing, a reporter asked Psaki:
"Given all the volatility surrounding Wall Street and GameStop, what is the Biden administration doing to protect the average American investor if there’s going to be, potentially a major market correction?"

She referred her to an SEC statement saying the commission was "monitoring the on-going market volatility."

The reporter pressed further: "Beyond just monitoring it, has he had any conversations with economic officials about what’s going on?"

"He's briefed by his economic team frequently," Psaki said. "But I don’t have anything more to read out for you."

Another reporter asked Psaki if Yellen would recuse herself from advising the president on GameStop due the speaking fees from Citadel.

Fox News host Tucker Carlson opened his show with the issue Thursday night, recounting a rant by hedge fund manager Bill Ackman last spring on CNBC that preceded a plunge in Hilton Hotels stock. Later, Carlson noted, Ackman's firm made more than $2 billion from trading in the stocks, including Hilton Hotels, prompting many people to believe he had pushed them down through his "historically dire predictions."

"This kind of behavior is common on Wall Street. Hedge fund managers bet money that a specific stock will decline in value. That's called short selling, and it has no obvious value to the American economy," Carlson said. "Short selling exists for the purpose of enriching the people who do it. Short selling hurts companies, their investors, and their employees. Ultimately, it hurts our country itself, yet it continues."

The Fox News host charged that the Biden White House "is more tightly controlled by business interests than any administration in history."

"Virtually every person there is beholden to the finance establishment," he said.

Carlson said that when the Reddit group began buying GameStop when they learned that hedge funds planned to short the stock.

"The hedge funds, for all their calculations, hadn't seen that coming, and they lost billions as a result of it," he said.

One of the Reddit investors, a pastor named Justin Speak, explained to MSNBC why he got involved.

"You know, I'm a pastor, and Jesus tells a story about this rich fool who has an overabundant harvest that's more than he can store," he said.

Speaks said "there was a part of me that thought, 'Well, it will be fun to be a part of this moment, to see this moment where at some level overnight these investors are losing their investing lives.'"

Carlson said Robinhood's restriction on buying GameStop and other stocks was done "under pressure from the hedge funds, who they really work for."

"So much for the free market you're always hearing about. There's nothing free about it," he said. "Turns out what Wall Street really hates is outsider trading, the idea that people from outside their world might be getting rich. That's the one thing they can't abide."