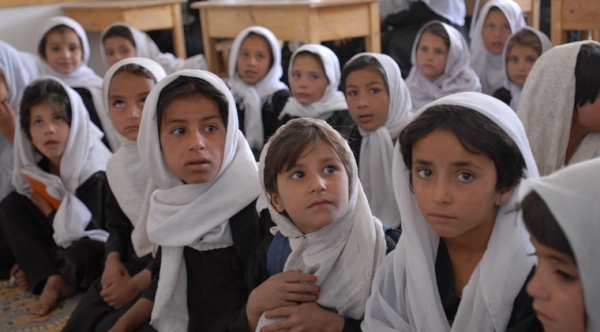 Afghan women are closely watching as peace talks continue between their government and the Taliban. Women hope the talks will end decades of unabated violence, and not return them to a social, political, and economic prison from which there is no escape.

Afghanistan has made significant yet fragile gains over the past two decades. The country’s Constitution and political system ensure equality and human rights for all. Its economy has been working toward self-sustainability, and Afghan society has restored its rich tapestry of art, music, and culture — a legacy that the Taliban had erased.

But for Afghanistan to maintain its hard-won gains for women and girls and in human rights and democracy, the United States still must play a role in preventing the rise of extremism. It won’t be forever – the Afghan people should and will control their future. But at this pivotal juncture, continued support from the Biden Administration and the U.S. Congress are needed both for Afghanistan and for the security of the United States.

This means investing in programs dedicated to the education, economic empowerment, and leadership development of women and girls, including initiatives that address the specific effects of COVID-19. But the needs are broader than that, as national and economic stability also impact the lives of women and girls.

It is imperative that the United States maintain its financial and institutional support of the Afghan National Defense and Security Forces. Professional, loyal to the Afghan government, and respected, the ANDSF faces operational challenges and suffers from heavy casualty rates in the fight against the Taliban. The outcome of the peace talks is critical for the ANDSF. If they collapse, Taliban violence may threaten the Afghan government; if they succeed, Afghans will likely require some form of integration program for former combatants. American leadership in these efforts is crucial.

On the economic front, the United States must continue to fund sustainable development aligned with Afghanistan’s policies and priorities. Continued U.S. support is key to long-term stability. A significant cut could signal a lack of American commitment to Afghanistan. This could embolden the Taliban to exact concessions from the government in peace talks.

Up to 90% of Afghans live below the poverty line following COVID-19 and a severe drought, according to the Ministry of Economy. Afghanistan has worked to reduce its reliance on foreign assistance, but the World Bank estimates that even with a peace agreement, the country would require financial aid at near-current levels over the next four years to sustain basic services. The United States can tie aid to an inclusive peace agreement that protects human rights and promotes government accountability.

COVID-19 has also threatened many of the enormous strides that Afghan women and girls have made over the past two decades. With the support of U.S. government-funded programs, about 3.5 million girls were in school before the pandemic. Female entrepreneurs had created 77,000 jobs, and women had run for and served in elected office at almost all levels of government.

But the pandemic has increased the risk of child marriage and gender-based violence, curtailed access to services like nutrition programs, and increased the burden of unpaid household labor. In the wake of the pandemic, the United States must help ensure funding for girls’ education, equal access to any financial recovery benefits, and training and mentorship programs. The United States can also help Afghanistan collect gender-disaggregated data, commit to women’s access to leadership positions, and ensure women’s organizations are consulted and included in key meetings.

No sustainable peace is possible if a political settlement does not include women at the table and does not guarantee women’s rights and opportunities. Afghan women understand the risks and are voicing their perspectives and priorities. While the Taliban have promised to respect “the rights of women that are granted by Islam,” they have not clearly defined what that means.

While the Afghan government and the Taliban will dictate the contours of any peace agreement, the United States and its allies must use political and financial leverage to ensure equal rights are preserved as guaranteed by the Afghan Constitution. In addition, women should be meaningful participants in any groups that implement, monitor, and verify an agreement.

When the United States stands with Afghanistan, it is making a commitment to the security of all Americans as well as to the rights of women and girls everywhere. It is our moral responsibility to support human rights, democracy, and peaceful, sustainable development in Afghanistan. Women are essential to that stability: They drive education, growth, and self-reliance, and we must continue to invest in them as a cornerstone of U.S. policy in Afghanistan.

Farhat Popal serves as Senior Program Manager of the Women's Initiative at the George W. Bush Institute. The views expressed are the author's own.