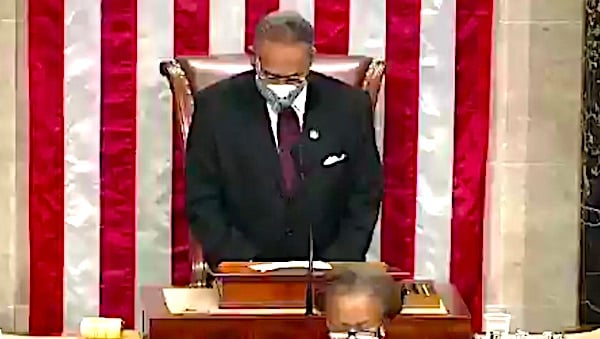 “We ask it in the name of the monotheistic God, [unintelligible], and God known by many names and by many different faiths, amen, and awoman,” Democratic Missouri Rep. Emanuel Cleaver, an ordained United Methodist pastor, said during the prayer to open the 117th Congress.

His comment sparked a backlash on social media as conservatives pointed out that “amen” means “so be it” — meaning that a literal translation of Cleaver’s prayer would read “so be it, and a woman,” as the Washington Examiner’s Jerry Dunleavy pointed out.

“‘Amen’ is a Biblical Hebrew word: אמן. It is a word simply meaning ‘may it be so.’ It has nothing to do with the word ‘man’ or ‘woman’ because it is FROM HEBREW,” the Daily Wire’s Ben Shapiro tweeted.

“Can I get an AWOMEN?” tweeted Lone Conservative founder Kassy Dillon.

Can I get an AWOMEN?

“Amen” is a Biblical Hebrew word: אמן. It is a word simply meaning “may it be so.” It has nothing to do with the word “man” or “woman” because it is FROM HEBREW. This is some of the dumbest s*** I have ever seen in my life. https://t.co/O4JhcHwywv

singing some hymns and hers https://t.co/TEimyLxs67

We are governed by the dumbest people alive https://t.co/1udq0InUdl

“Amen and Awoman?!?! Don’t they know that gender isn’t binary,” tweeted Republican Florida Rep. Matt Gaetz. “What about the other 42 genders??”

The prayer came after Democratic Speaker of the House Nancy Pelosi and Democratic Massachusetts Rep. James McGovern announced a resolution Friday intended to “honor all gender identities” by modifying pronouns in the House rules for references to family relations, such as father, mother, son, daughter, brother, sister.

These words in the update rules would be changed to “parent, child, sibling, spouse, or parent-in-law,” according to the resolution.

Though Pelosi herself announced the changes, the California Democrat’s Twitter profile retains language that does not follow these guidelines. As of Monday morning, her profile still said, “Speaker of the House, focused on strengthening America’s middle class and creating jobs; mother, grandmother, dark chocolate connoisseur.”