The FBI's arrest of a "revolutionary" activist Thursday night has shattered the conventional narrative that the loose-knit, "anti-fascist" movement known as Antifa had nothing to do with the violence that shut down the U.S. Capitol and prompted the second impeachment of President Trump. 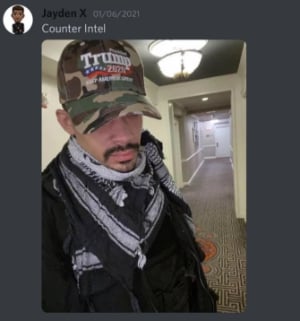 John Sullivan posted on social media a photo of himself in Trump gear inside the U.S. Capitol.

John Earle Sullivan of Sandy, Utah, insists he's not a "member" of Antifa or Black Lives Matter, but the activists in black bloc who were behind the estimated $2 billion in damage over the summer don't carry membership cards. In quieter moments, many explain their aim is to provoke a revolution and replace the American republic with an anarchist system in which there is no state.

He's on video at a late-August rally in Washington, D.C., leading a chant: "It's time for a revolution."

See video of Sullivan being detained by police Jan. 9 (he was later released), following by his remarks in August in Washington, D.C.:

Last week, Sullivan insisted in an interview with CNN's Anderson Cooper that he was in the Capitol building and at the scene of the death of Air Force veteran Ashli Babbitt on Jan. 6 merely as a passive observer to "document" the chaos.

But the Justice Department on Thursday night after Sullivan was arrested presented video evidence of him inciting rioters to climb over a wall, admitting to breaking a window, and celebrating with a photo journalist the fact he and his allies had successfully sowed violent chaos in the U.S. Capitol that would be blamed on Trump supporters.

Prior to Sullivan's arrest, the prominent "fact-checker" site published by the Poynter Institute, Politifact, declared there's "no evidence that the crowd was infiltrated or led by antifa activists in disguise, and specific individuals held up online as antifa activists have turned out to be Trump supporters."

In a video by Sullivan that he posted on his Discord chat channel he can be heard declaring, "We did it!"

"You were right! We did it!" said the photo journalist, identified as Jade Sacker.

"Dude, I was trying to tell you. I couldn't say much," Sullivan said. "Is this not going to be the best film you've ever made in your life?"

Sackers' clients, according to her website, include NBC, NPR, the Huffington Post, Buzzfeed News and Radio France.

Footage of CNN’s Jade Sacker inside US Capitol with far leftists celebrating after they allegedly infiltrated Trump supporters & incited a riot, “We did it!”

They seem to be happy about this so called "insurrection". pic.twitter.com/Icl1Cf8251

A user named "deaththreat" admitted a "large sum of anti Trumpers" comprised the people who stormed the Capitol on Jan. 6.

Sullivan's case is one of more than 80 that the Justice Department has brought in connection to the violence at the Capitol.

Along with anti-Trump extremists, the FBI has arrested extremists who have declared support for the president.

Among them is Jacob Chansley, the QAnon conspiracy theorist who was photographed wearing horns as he stood at the desk of Vice President Mike Pence in the Senate chamber.

However, Chansley doesn't fit the profile of a typical Trump supporter. He has explained he's a practioner of shamanism, and Reuters reported a detention memo by Justice Department lawyers in Arizona said he "has spoken openly about his belief that he is an alien, a higher being, and he is here on Earth to ascend to another reality."

Among the mob at the Capitol were members of a "group" that has drawn the attention of the FBI ahead of the inauguration called the Boogaloo Bois.

The Atlantic reported the FBI warned earlier that boogaloos could launch attacks in state capitols this Sunday.

But the center-left magazine said "the boogaloos don't appear interested in fighting for Donald Trump — they tend to despise him, mostly because they think he panders to the police."

"But for the past year, boogaloo bois all over the United States have been cheering on the country’s breakdown, waiting for the moment when their nihilistic memes would come to life and the country would devolve into bloody chaos," wrote The Atlantic's Michael J. Mooney.

He said it's not really a movement, but more like "an absurdist internet culture propagated by libertarian-leaning gun enthusiasts on 4chan — the anonymous, Wild West version of Reddit — that has somehow moved into the real world."

Acting U.S. Attorney Michael Sherwin said the charges so far related to the Capitol breach are "only the beginning" and his office will increase charges after more evidence is gathered in cooperation with the FBI.

"The gamut of conduct is mind-blowing," he told reporters. "We're looking at significant felony cases tied to sedition and conspiracy. Their marching orders are to build seditious and conspiracy cases. Those have prison terms of up to 20 years."

Sullivan: 'It's our house'

The DOJ said Sullivan, 26, was charged with one count of knowingly entering a restricted building, one count of violent entry and disorderly conduct on Capitol grounds and one count of interfering with law enforcement.

Sullivan, the affidavit said, "wearing a ballistics vest and gas mask, entered the U.S. Capitol through a window that had been broken out, pushing past U.S. Capitol Police once inside."

In one of many videos he posted on YouTube under his username "Jayden X," he is heard cheering other rioters as they enter the building.

Before smashing a glass pane, the FBI said, he's heard saying: "We got to get this s**t burned" and "It's our house motherf*****."

He further said, according to the FBI: "We accomplished this s***. ... We are all a part of this history."

Sullivan also admitted to the FBI that he videoed the moment Ashli Babbit was shot dead by a Capitol police officer.

He recorded himself climbing through a broken window into the Capitol building then telling law enforcement to stand down.

"You are putting yourself in harm's way," he said.

"The people have spoken," he went on, and "there are too many people, you gotta stand down, the people out there that tried to do that s***, they got hurt, I saw it, I'm caring about you."

He also is seen entering an office then looking out a window at the crowds of Trump supporters.

The camera then shows a smashed window pane next to him.

"I broke it, my bad, my apologies," Sullivan said.

In his video of the moment Babbitt was shot, rioters are seen breaking through glass-paned doors.

Sullivan acknowledged in an interview last week with Rolling Stone that he was pretending to "relate" to Trump supporters and "build trust."

In a YouTube video posted Tuesday, Sullivan insisted he was at the Capitol only to document the event.

"For any misconceptions on why I was there in the first place, because I was documenting this event," he said.

'This monumental event in history. If you knew about this s***, would you not be there as well. Maybe some of you are scared? And that's valid ... but I put myself in that situation all the time and that what my job is to do, that's what my livelihood is ... otherwise I'm broke and I have no life.

Sullivan said he was there "just to record and what I do is blend in with the crowd."

He said "people already think I'm Antifa, which is not true, and they think I'm with BLM, and while I think black live matter I'm not with the organization," he said.

"I have my own organization, Insurgence USA."

He describes Insurgence USA on the group's website as an anti-fascist group formed after the death of George Floyd that works for "the unification of our nation because a people united will never be divided."